Newbiggin Hall is a collection of buildings, the earliest of which dates from just after 1322. A large degree of rebuilding and redesign was undertaken in the 1500's, with further additions and changes made in 1533, 1796 and 1846. 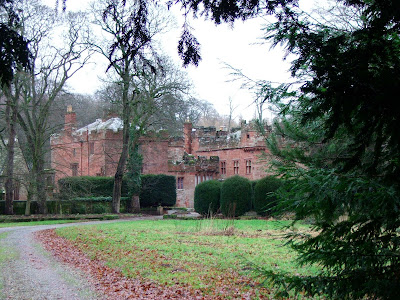 The hall backs onto the church of St James, and it looks almost as if the Norman and 14th century church may have been a private chapel to the original pele tower here. 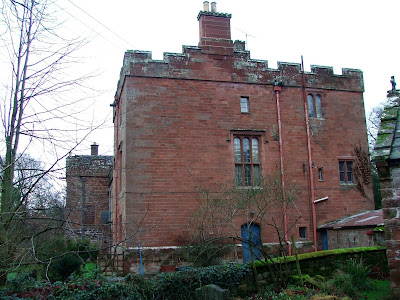 One tower here, the Jerusalem Tower, was built around 1460, and was used as a refuge for the Crackenthorpe family when they were fighting in the Wars of the Roses. The Crackenthorpes acquired ownership of Newbiggin in around 1332, just after the first tower was built.

The hall and its grounds are private, although limited views can be had from the graveyard of St James, and from the bridge over the beck just beyond the church.
Posted by The Cumbrian Castle listing. at 4:21 pm

hi,i am sure i stayed here with my family for a holiday about 20 maybe 25 years ago,do you know if it is still let out for holidays ?

We, the dutch family Jansen, stayed there for two weeks in 2006. We've had a wonderfull holiday!!It is still in our mind and harts.Thanks to the very friendly owners!! There was a beautifull garden, cosy kitchen with the warmth of an AGA (I made bread,jam,cakes and pies and stews) Very impresive was the ancient tower we've stayed in.It felt like we were in 1500!!We would like to stay there again.

I lived in the Wing of the Hall some 20 years ago, and recall that when we Forestry / Ecology students from nearby Newton Rigg College were not in residence, the owner, Major Henry Sawrey-Cookson (?) used to let out the Wing for some holiday lets. It is a fantastic place and would hope that the family still let out the Wing...

Yes its still used as a holiday let, its called the WING the old part where people stay. Its lovely with the old 4 poster beds overlooking the river and the stone spiral staircase, the cooksons are still there now. I lived in newbiggin for 25 years and was a friend of the family, and remember the Randalls who came on holiday there and some of them even moved up here after that holiday. mark J.

I remember coming to stay for the school hols at the Jewitts and playing at the hall and in the grounds..lovely part of this Country an the Cooksons were lovely people..

We stayed here in 2012, wonderful place, there's a holiday listing (under Newbiggin Hall Nr Penrith), but there doesn't seem to be any availability this year.

I visited Newbiggin Hall in the mid-eighties, 1986 or 87. A friend rented the wing whiie he was studying forestry at Newton Rigg college. It was definitely the best student digs I have ever seen. Stone stairs and really spacious rooms, probably very cold in the winter. I went up on the roof which provides excellent views. Just looked at it on Google Earth. If I am not mistaken the coordinates are: 54°39'6.38"N, 2°34'40.71"W

Hi we were family friends of the Major and we came to stay when I was 14(now 45!)it is an amazing place we stayed in the main house with all the suites of armour everywhere etc.We hung out a bit as a family with the Cooksons and I remember Mark Jewitt!coming to visit Rawlinson!Fab place and people!
Charity