Another of Kendal's old inns has been redeveloped, and comparing today's photo with one taken in 2006 (below) it's more than just a cosmetic face lift!! John Speed's map of 1611, shows the site of the Dun Horse with a building there already, but unfortunately for us, he doesn't indicate if the building was being used as an inn or not.

176 years later, in 1787, John Todd took it upon himself to map the town....his map shows a building the same shape as the present day inn, but once again, it's not named and there's no indication that this is an inn or not. 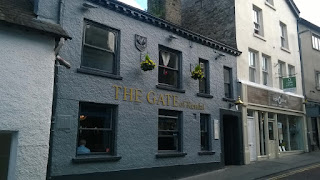 Above. The newly rejuvenated The Gate of Kendal.

Finally, in 1833, John Wood named the building on this site as the Dun Horse Inn....so we know that the Dun Horse has been here from at least 1833....possibly earlier though, as Parson and White's Directory of 1829, names George Clark as the inn keeper at the Dun Horse. His wife Jane joined him as landlady in 1830. They stayed on at the inn until 1834. 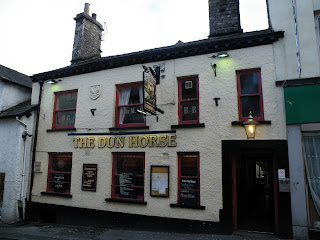 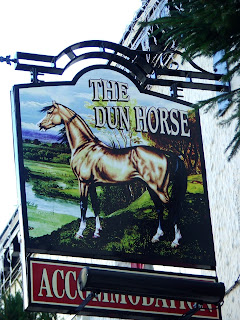 
The Kendal Borough Police returns report, dated 1892, lists Scott and Son, a brewing company from Skipton in North Yorkshire, as the owners, employing Septimus Longmire as the inn keeper. The Dun Horse provided its customers with a choice of three drinking rooms, five bedrooms, a large dining room with seating for 67 diners, and stabling that would easily provide accommodation for 14 horses.

In 1904, Whitwell and Mark, a brewing house based in Kendal, took over the Dun Horse, remaining owners well into the 1940s. They applied for planning permission to change the use of the stabling to that of 'tea room and service area' in 1935, possibly incorporating the building now occupied by the Joshua Tree bistro just down the alley to the side of the the Bellingham's town house that used to house Henry Robert's book shop.
Posted by The Cumbrian Castle listing. at 11:07 pm No comments: