Rosgill Hall sits on the banks of the River Lowther, about two miles north of Shap abbey, and about two and half miles west of Shap. This small hall is either on the site of a pele tower, or contains the remains\masonry of a pele tower. The hall is also described as a fortified house, in the same vein as Helsfell Hall and Gillthwaiterigg near Kendal. 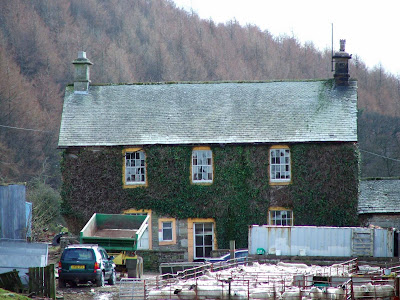 The manor of Rosgill was held by the Rosgill\Rosgil family from the early 1200's, through to around 1399, when it passed by marriage to the Salkeld family. In later years, the manor was then sold to the Lowthers. The Rosgills were of such standing, that there is a burial chamber at the end of the South aisle in the nearby church of St Michael's in Shap. Some records state that the house, as seen in the photo above, once existed alongside the tower here at Rosgil. The current building definitely dates from the 16th century, but with so little information to go on, there's not really much else that can be said here.
Posted by The Cumbrian Castle listing. at 8:05 pm