Situated on the 20 acre island of Piel, at the mouth of Piel Channel, this castle has battled the elements for nearly 880 years. The island was originally fortified during the reign of King Stephen, although a licence to crenellate was granted sometime before his reign began, in 1327. This early licence was granted to the Abbot of Furness Abbey by Edward III, and was documented as having been granted to "crenellate their dwelling house of Fotheray in Fourneys". 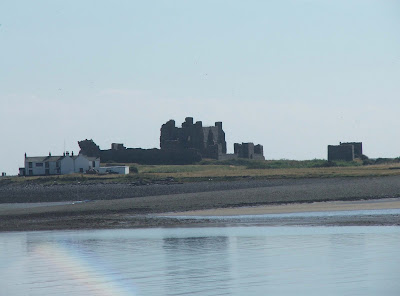 The castle has in the past also been known as Fouldry Castle, The Pile of Fotheray, Fowdray, and Peel....but it is by the island's name that it is best known. Piel Castle. The island was fortified as a means to defending the Piel Channel, a deep area of water that would enable ships of all sizes to dock at nearby ports. The Abbey at Furness was originally a controlling force in local trade, and exerted great control over the area. The fortification on this small island, meant that the Abbey could control sea-going traffic arriving and leaving the West coast of Lancashire (as it was then) The lands on the island were granted to the order of Savignac monks by King Stephen in 1127, and formed part of the grant which also included the lands on which Furness Abbey would be built. The Savignac order merged with the Cistercians around 1150-60, and it was about this time that the Abbey's influence in the local area, and indeed wider afield began to grow. This of course included trade, and the island was an ideal place to build a protected harbour and warehouses. 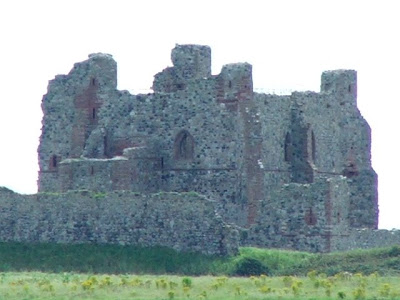 In 1212, a wooden tower, possibly of a defensive nature, was erected on the island, when King John granted the abbey a license to land one ship of wheat, four and other foods during a famine that was affecting the area. Further licenses were granted in 1232 and 1258, granting the abbey the right to ship unlimited ship loads of cargo in and out of the harbour. These licenses also meant that the ships were now under Royal protection.
With the full license to crenellate from 1327, the stone castle was constructed, and much of what can be seen today, dates from this period. As well as keeping pirates and raiders away from the valuable stores and cargoes held at the castle, the strong walls also kept the Royal Customs officers out. Some documents suggest that smuggling, to the gain of Furness Abbey, was committed at this time. 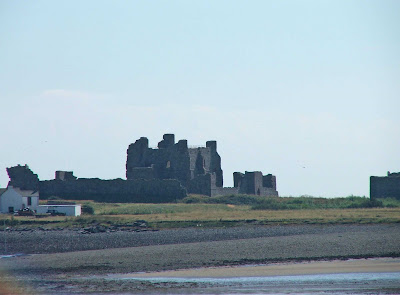 When Henry VIII dissolved the monasteries of Great Britain, the castle passed into Royal ownership. With the threat of invasion from mainland Europe, the castle was upgraded, re-fortified and strengthened. The channel that ran alongside Piel Island was recognised as being deep enough for large enemy warships, with large amounts of men to use. By 1537, the castle was in a poor state of repair. It was stated at the time that £300 would scarcely be enough to make good any damage. During the civil war, the Parliamentary forces considered repairing the castle and making it a North Western stronghold. Further investigation apparently revealed the level of decay and idea was shelved. Charles II, upon his return to England, and the restoration of the monarchy, granted the island and the castle to George Monck, Duke of Albermarle. A certain amount of repairs were conducted between 1876 and 1878, but these works seem to be the last time the castle was attended to. 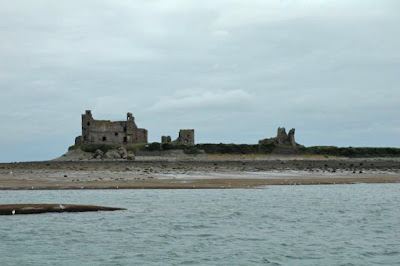 The remains consist of the keep with its attendant curtain wall, around half of which still survives, and the outer ward with its corner towers and chapel. The sea has claimed the curtain wall to the South and to the East of the castle, with the North Eastern and South Eastern towers also suffering erosion. The outer ward walls have also been eroded on the South and the East of the castle, and to the West it looks as if the wall has been demolished, possibly used for building material elsewhere on the island. The castle keep has also been eroded, so that around a quarter of the of the East wall has fallen into the sea. Huge amounts of fallen masonry lay on the beach to the South and the South East of the island. The inner ward earthworks still survive between the inner ward wall and the outer ward, but again, sea erosion has destroyed the Southern and Eastern portions. The keep's walls are around 2 and a half metres thick, with huge buttresses at each corner. The gatehouse on the North end of the keep, still has the grooves in which the portcullis was raised and lowered. The inner part of the gatehouse also had a portcullis. The defensive capabilities of the castle seem quite formidable.....whether they were ever put to the test is not known.
The castle is still pending a visit, but I've managed to take some photos from Roa Island which lies about half a mile to the North of Piel Island. From here, in the Summer, a ferry can be used to gain access to the island, and the castle is freely accessible. Unfortunately, each time I've been to visit the castle so far, the ferry hasn't been running. Another visit is due this Summer.
Posted by The Cumbrian Castle listing. at 7:50 pm