A number of churches in Cumbria and the surrounding counties (North Yorkshire and Lancashire) have very well preserved draw bars remaining in their main (Southern) doorways. The reason behind the existence of these structural characteristics is a bit of a mystery (except where St Cuthberts in Great Salkeld is concerned) and will take a little explaining. It's probable that I won't be able to explain their existence in these few buildings, but I'll make an attempt anyway.

This is a beautiful church. Not only does it retain much of its medieval architecture and character, it also retains its 14th century fortified tower, 'implanted' into the skeleton of a 12th century church. The draw bar in the tower doorway, leading into the chancel, is only a single part of the defences employed here. The walls of the tower are around four feet thick, there are no original windows at ground floor level, the yett (a door of oak and iron) is sturdy enough to stand all but fire. The draw bar slots here are specifically designed to secure the door from within the tower, excepting entry from the chancel. This means that the rest of the church was not included in the defensive plans of those who built the tower. This building is, in essence, different from the two others included here. We know that the church tower was specifically built with defence in mind. It has the thick walls, stone floors at all levels, the yett doorway as a single entrance into the tower, and fireplace on the first floor, indicating that it was also intended as a place of habitude, or refuge. I love this building. It gives me not only a beautiful medieval church full of fascinating history, but an incredibly well preserved 'pele' tower which has retained all its defining characteristics. 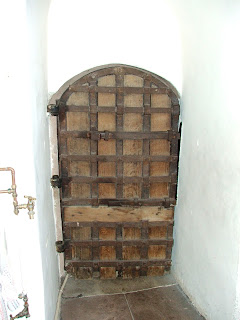 Above. The yett, made of solid oak with iron bands to provide additional strength. 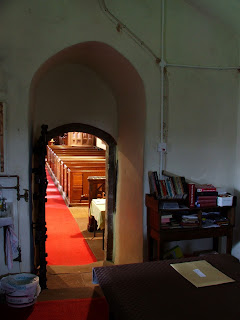 Above. The tower with the door open into the Chancel. The thickness of the walls can be clearly seen here. 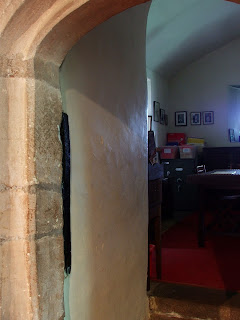 Above. The slot into which the iron draw bar slots into.

The draw bar at St Marys is so much more difficult to explain away. Sure there are local legends about the church being burned by the Scots, but it's difficult to tell what purpose this level of security would provide against a well organised campaigning army! The draw bar here at Kirkby Lonsdale is built into a 14th century wall. It is deep and would be able to house an impressive piece of timber. One has to remember though, that architectural features can be moved from one part of a building to another and embedded into earlier or later walls. They can be rebuilt elsewhere so that their original meaning or intent is lost.....so it's difficult to tell really what they were intended for. A draw bar slot, by its very definition, is there to provide security. And this is where the problem lies.....does security necessarily also mean defence? I'd never really thought about the difference (if any) between security and defence, until forced to do so by Philip Davis of the gatehouse website. 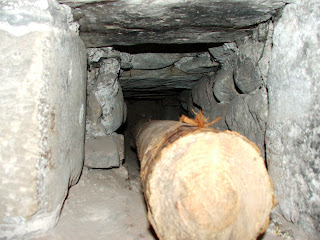 Above. Looking into the draw bar slot. 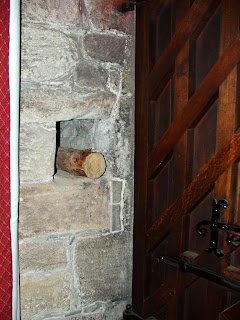 Above. Another view of the draw bar slot. 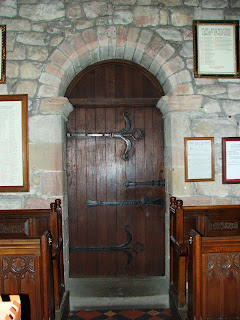 Above. The door in the Southern wall. 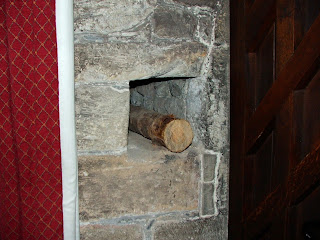 Above. Another view of the draw bar slot.

The draw bar slot at St Wilfrid's in Melling, is, again, in the Southern wall of the church. The walls in which it is embedded date from the 15th century. Local legend tells us that St Wilfrid's was also burned by the Scots, though the wall in which the draw bar is built into is too late to have been affected by this incursion. 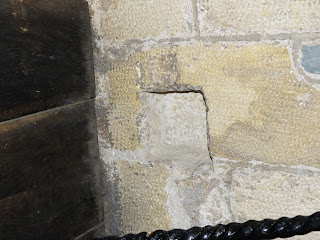 Above. The receiving end of the draw bar slot. 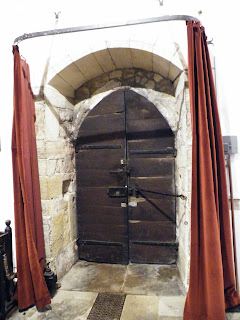 Above. A view of the Southern door. 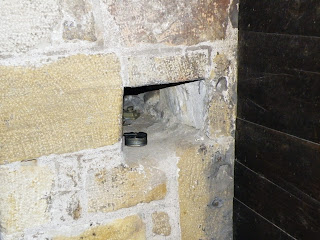 Above. The deepest end of the draw bar slot.

This is a much altered church, with parts rebuilt and radically changed over the years. The draw bar slot here, impressive as it is, doesn't really offer us any clues as to its true age.

All in all, these enigmatic elements of these church's fabric just to seem to pose questions with no answers. My conclusions are therefore as follows:

Locks for large doors must have been very expensive in the middle ages.....so only the Priest's doors would have been fitted with these pricey items. The larger, Southern entrances to our churches, were therefore secured from the inside using sturdy pieces of timber fitted into the draw bar slots built into the thickness of the walls.

Security (not defence) was an important element of a church's fabric. Many churches, being the only stone building in a village, would have been used to store important documents in their large wooden chests, some of which still survive today, not unlike banks storing property deeds for customers.

Good old fashioned security therefore seems to be the order of the day. With some churches built in areas where the crime rate was undoubtedly higher, a sturdy draw bar slot securing the main 'public' entrance way was the sensible thing to build into your church, it really does seem that it was a simple as that. Many thanks to Philip Davis for pointing me in the right direction.

Posted by The Cumbrian Castle listing. at 9:36 pm 2 comments: