Plumpton Hall
Plumpton
Near Ulverston
Cumbria
Plumpton Hall lies about two miles off the A590, East of Ulverston. This tiny collection of houses that makes up Plumpton, overlooks Plumpton Bight, a shallow bay to the North West of Cartmel Sands. From the shore line here, Grange can be seen across the estuary, with the Leven Viaduct spanning the width of the sands and less than a quarter of a mile to the South, the Eastern end of Ulverston Canal enters the bay.

Above. Looking East towards the older part of the hall (at the left of the photo)
Plumpton Hall sits on the last few hundred yards of tarmac road eventually leading down to the shore of the bay. There are essentially two buildings here, a Western wing, consisting of an H plan building...a central hall with two wings to the North and South, and an Eastern portion (shown below) consisting of a single two story building. 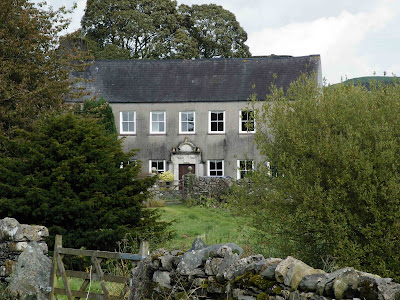 Above. The newer hall, looking roughly North.
It is thought that there has been a 'manor' house on this site since the mid 1500's, but it's unlikely that anything of this earlier original building remains. The oldest parts of the hall(s) are the central hall and two wings of the Western building, probably dating from the 17th century. As with a number of buildings from this period in this particular area, I would say Westmorland, but the peninsula was part of Lancashire up until 1974, there are good examples of Westmorland chimneys here.
The second part of the hall, is the two story building that faces South with gardens set out about its front. This building was most likely built towards the end of the 1780's and some accounts state that it was originally a three storey house. I'm not sure at what point the third storey was removed. 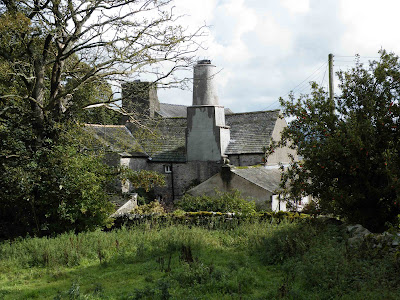 Above. Looking at the rear of the older part of the hall, with its beautiful Westmorland chimney.
After 1554, the 'manor' of Plumpton fell under the ownership of the Sawrey family, the most notable member of the family being John Sawrey, a puritan advocate who bitterly opposed the Quaker, George Fox. He was drowned whilst attempting to cross the Leven sands in 1665. 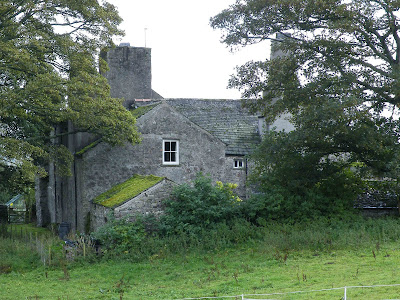 Above. A closer view of the rear of the older part of the hall.
A local legend tells of a 'haunted' brass lantern, kept at the hall, and endowed with miraculous powers that enabled it to find its way home if it was ever removed from Plumpton Hall. Check this link for a photo of the lantern.
Denis R. Perriam and John Robinson write very briefly in their excellent book "The Medieval fortified buildings of Cumbria" about Plumpton Hall...but with no discussion or decision on whether this building ever constituted a defensive manor. There seems to be no mention of towers that have been demolished here, or towers that have been swallowed by the later additions to the site. Still....a beautiful building in a beautiful location.
Posted by The Cumbrian Castle listing. at 9:46 pm

I recall being taken to visit Plumpton Hall in the 1950s. It was a working farm run by Jack Proctor and his wfe Rose, a relative. I would like to find out what happened to them. I remember seeing the brass lantern hanging in the hall and hearing of the ghost of a young woman.

The towers are all chimneys of various ages .hence the different styles