Not a castle as such I know, but worthy of its place on this blog none the less. This is a an ancient hill fort, visible from the minor road that leads from the Lake (South of Kirkcudbright) in a three mile loop back to the Townhead Road. The hills within this looping road are littered with other minor forts, the remains of small stone circles and stones with cup and ring carvings. 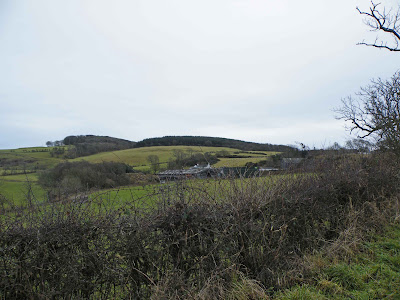 Above. The wooded area to the left of the photo shows where the fort is located.

The fort measures around two hundred and ten by one hundred and sixty feet, and sits on the summit of Castle Hill (aptly enough!) Apparently, visible beneath the overgrown summit of this small hill, there is a stone rampart running almost the full circumference of the hill, with an opening on the North East side. Below this top rampart, there is a ditch and another stony rampart, possibly added at a later date, further strengthening the position this fort holds. 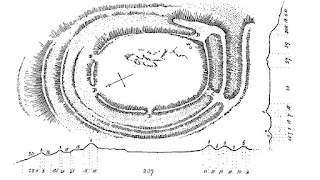 Above. Plan of Drummore Fort from The Motes, Forts and Doons of the Stewartry of Kirkcudbright, by Frederick R. Coles

In his report of 1891, Frederick Coles stated that the ramparts were still imposing and strong, suggesting to him that the fort was constructed with one thing in mind....defence. He also stated that two wells were still visible in amongst the thick vegetation at the summit of the hill, indicating that the fort was meant to be inhabited. The fort occupies an area of 430 by 250 feet, with a central, rough area measuring 207 by 174 feet from rampart to rampart. The ditches, were, at Coles' time, from 6 to 18 feet wide, and around 8 feet deep.
Posted by The Cumbrian Castle listing. at 3:09 pm No comments: