The Curse of Carlisle, and the Cursing Stone

The Curse of Carlisle and the Cursing Stone
Carlisle
Cumbria

In the underpass that runs beneath the dual carriageway near to Tullie House museum and Carlisle Castle, a large 14 tonne polished granite stone, inscribed with a 1069 word curse has been placed. The curse was first uttered by the Archbishop of Glasgow, Gavin Dunbar, in 1525, and was aimed at the various families that made up the infamous Border Reivers, who ravaged and terrorised the English and the Scottish sides of the borders. 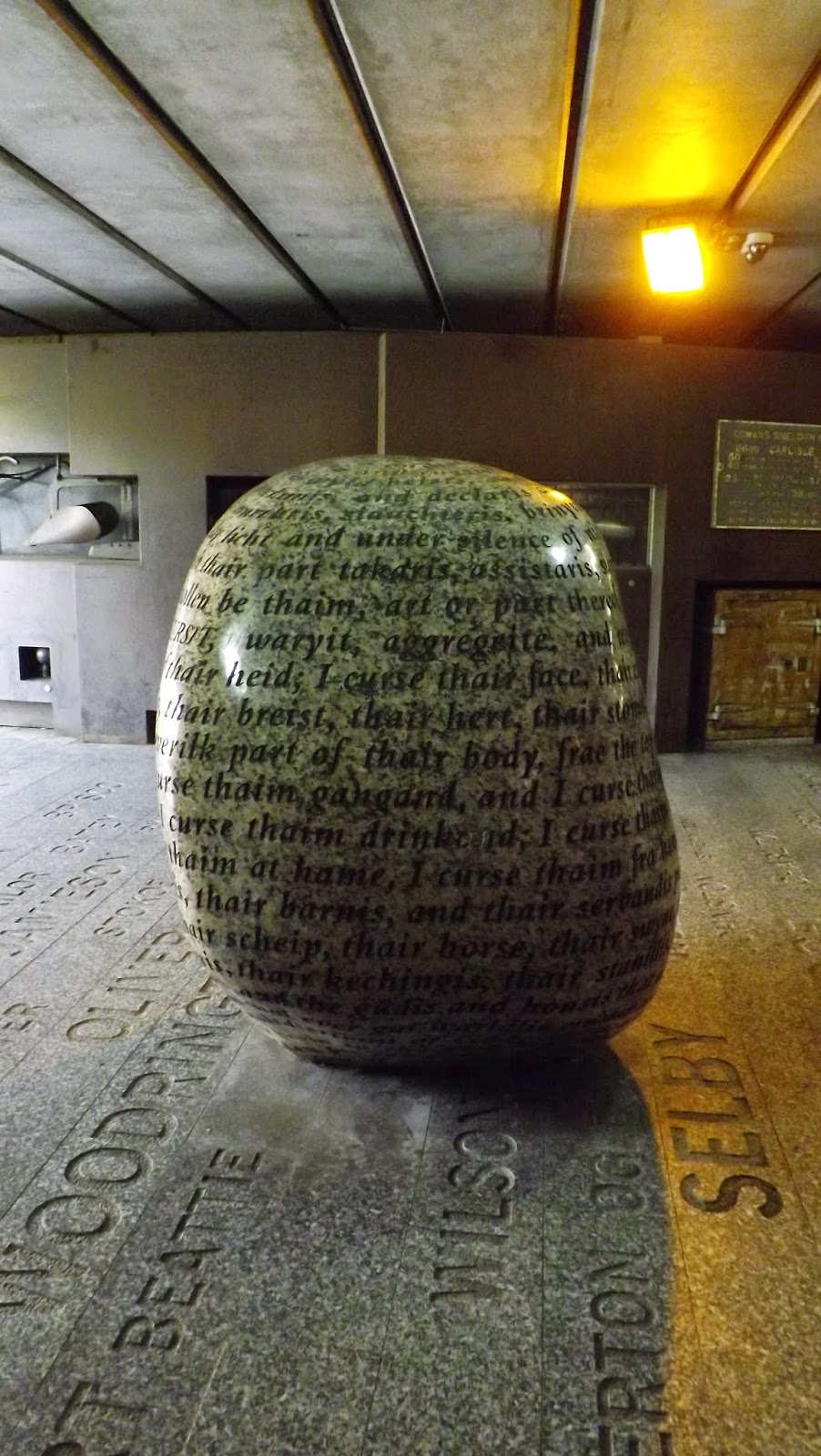 Archbishop Dunbar wrote the curse, now known as the The Monition of Cursing, in order that it should be read out in all the churches on the Scottish side of the border, as a warning to the Reiving families. It cursed them to the fires of Hell if they didn't return to the church and cease their thieving ways. Dunbar's curse wasn't the first to be issued against the Reiving families.....in 1498, the Bishop of Durham, Richard Fox denounced the Reivers of Tynedale in Northumberland and forbade any ministers from admitting them to church. 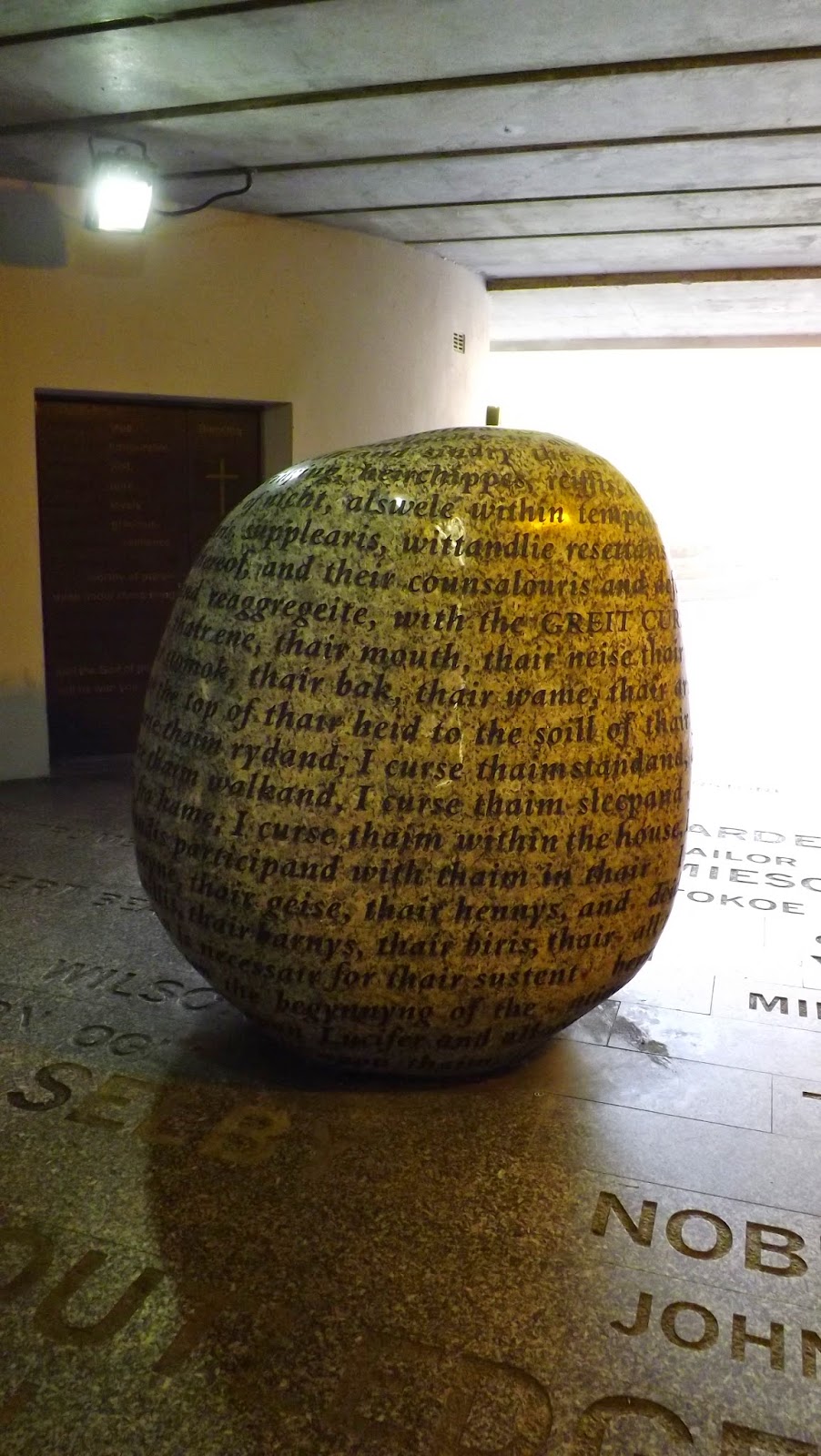 Carlisle's Cursing Stone was installed in 2000 as part of the Millennium celebrations, but drew almost instant criticism from a Christian minority who took the stone and the curse as a slur against Christianity. They demanded that not only should the stone be removed, but that it should be destroyed. Luckily common sense won the day and the stone survives. 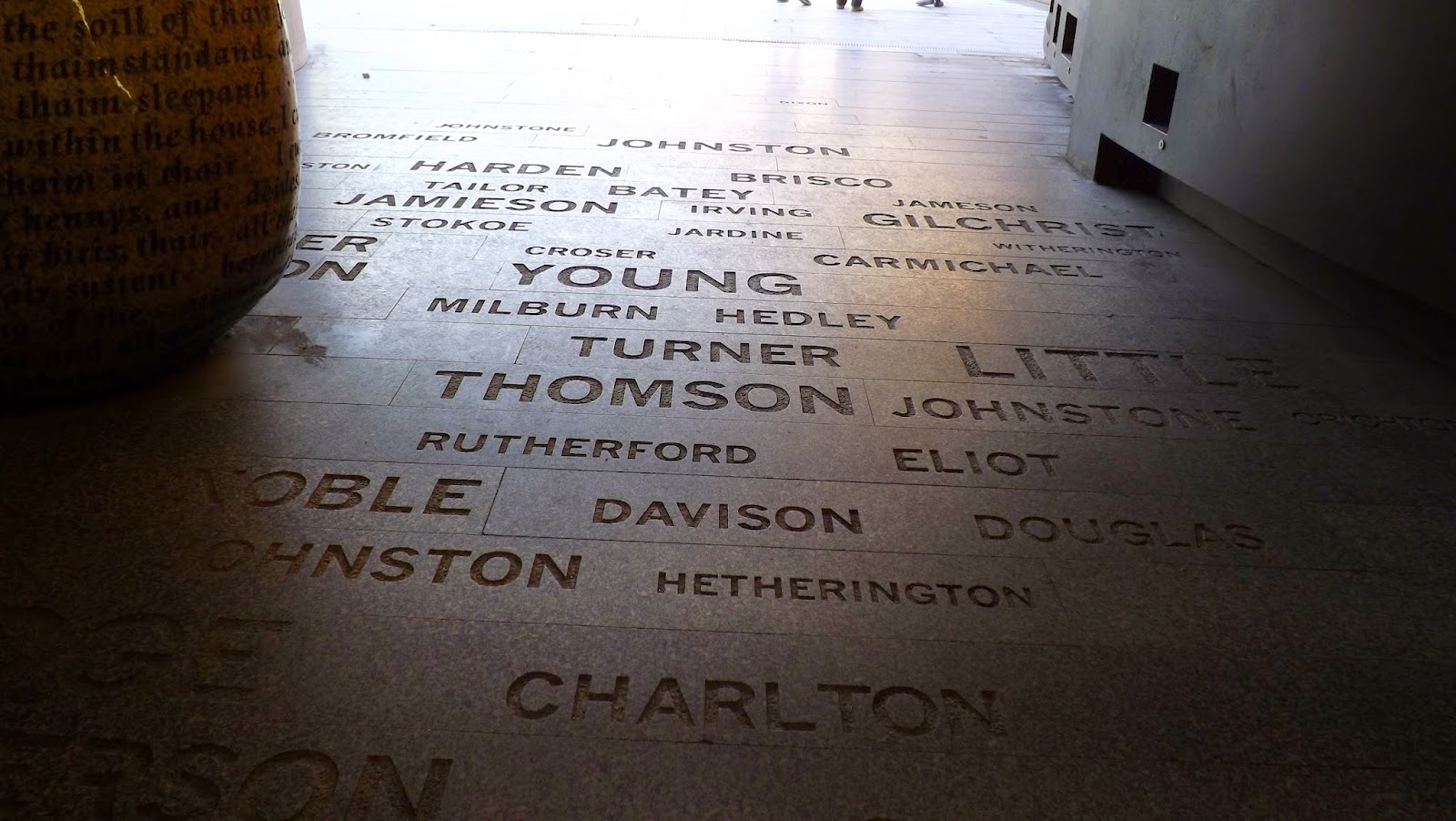 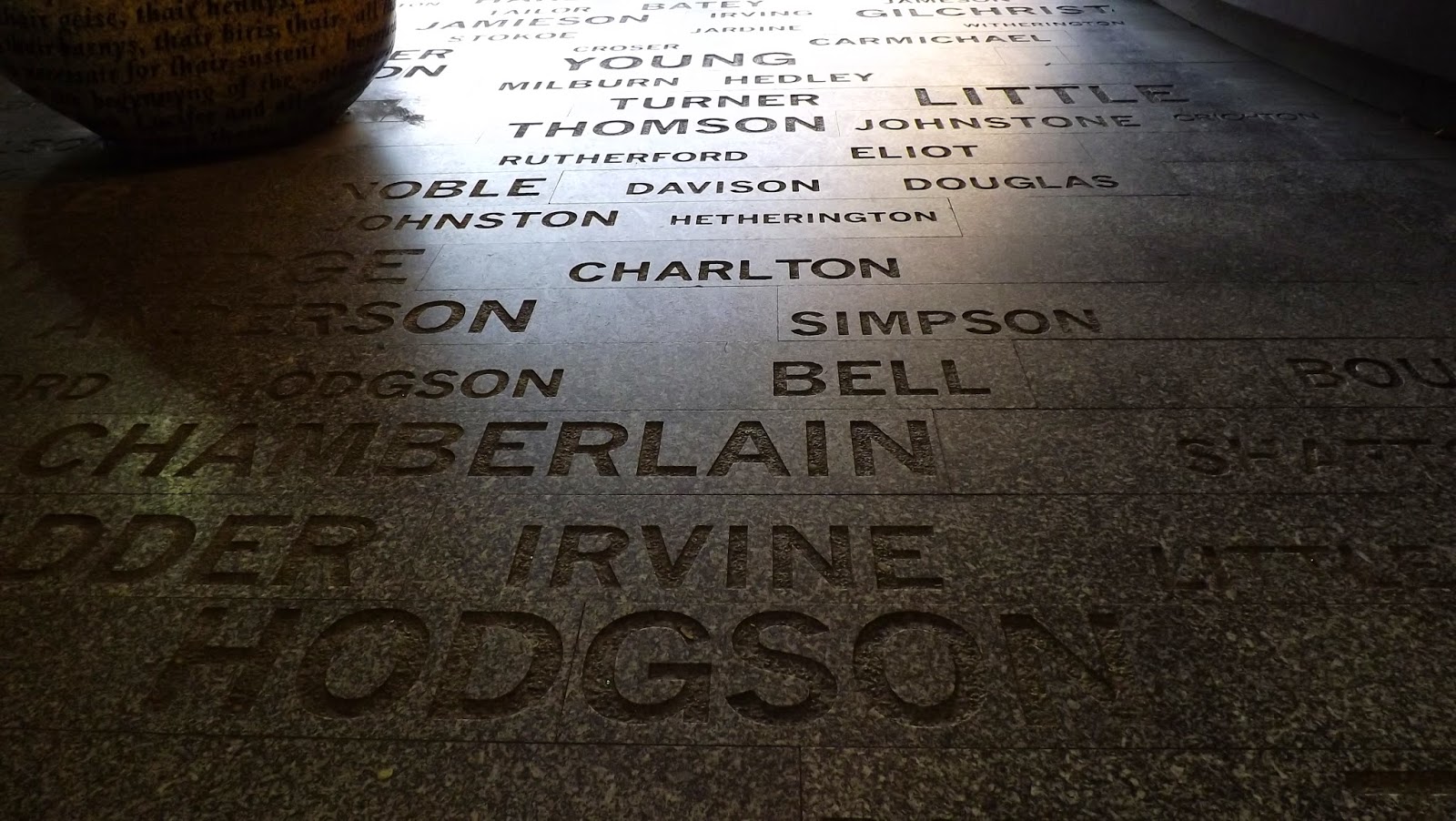 Carved on the floor around the stone, are the surnames of the most prominent of the Border Reiver families;


Each one of these family names represents the human side of the violence that was meted out to the Border areas for around 400 years. Each of these family names was hated and loathed by Archbishop Dunbar when he uttered his curse. There are other names of course, but the ones that are listed here are some of the more well known families. They wrought havoc on both sides of the border, against English and Scottish victims, and poured scorn and ridicule on the rule of the Wardens of the Marches. Carlisle Castle was the headquarters of the Western Marches, and was used on a number of occasions to imprison captured Reivers, so the link between the Curse stone and the castle of Carlisle and the Reivers is a long a violent one.

The text of the curse:

"May all the malevolent wishes and curses ever known, since the beginning of the world, to this hour, light on them. May the malediction of God, that fell upon Lucifer and all his fellows, that cast them from the high Heaven to the deep hell, light upon them."

"May the fire and the sword that stopped Adam from the gates of Paradise, stop them from the glory of Heaven, until they forebear, and make amends."

"May the evil that fell upon cursed Cain, when he slew his brother Abel, needlessly, fall on them for the needless slaughter that they commit daily."

"May the malediction that fell upon all the world, man and beast, and all that ever took life, when all were drowned by the flood of Noah, except Noah and his ark, fall upon them and drown them, man and beast, and make this realm free of them, for their wicked sins."

"May the earth open, split and cleave, and swallow them straight to hell, as it swallowed cursed Dathan and Abiron, who disobeyed Moses and the command of God."

"May the wild fire that reduced Thore and his followers to two-hundred-fifty in number, and others from 14,000 to 7,000 at anys, usurping against Moses and Aaron, servants of God, suddenly burn and consume them daily, for opposing the commands of God and Holy Church."

"May the malediction that suddenly fell upon fair Absolom, riding through the wood against his father, King David, when the branches of a tree knocked him from his horse and hanged him by the hair, fall upon these untrue Scotsmen and hang them the same way, that all the world may see."
"May the malediction that fell upon Nebuchadnezzar's lieutenant, Olifernus, making war and savagery upon true christian men; the malediction that fell upon Judas, Pilate, Herod, and the Jews that crucified Our Lord; and all the plagues and troubles that fell on the city of Jerusalem therefore, and upon Simon Magus for his treachery, bloody Nero, Ditius Magcensius, Olibrius, Julianus Apostita and the rest of the cruel tyrants who slew and murdered Christ's holy servants, fall upon them for their cruel tyranny and murder of Christian people."

"And may all the vengeance that ever was taken since the world began, for open sins, and all the plagues and pestilence that ever fell on man or beast, fall on them for their openly evil ways, senseless slaughter and shedding of innocent blood."

"I sever and part them from the church of God, and deliver them immediately to the devil of hell, as the Apostle Paul delivered Corinth. I bar the entrance of all places they come to, for divine service and ministration of the sacraments of holy church, except the sacrament of infant baptism, only; and I forbid all churchmen to hear their confession or to absolve them of their sins, until they are first humbled / subjugated by this curse."

"I forbid all christian men or women to have any company with them, eating, drinking, speaking, praying, lying, going, standing, or in any other deed-doing, under the pain of deadly sin."

"I discharge all bonds, acts, contracts, oaths, made to them by any persons, out of loyalty, kindness, or personal duty, so long as they sustain this cursing, by which no man will be bound to them, and this will be binding on all men."
"I take from them, and cast down all the good deeds that ever they did, or shall do, until they rise from this cursing."

"I declare them excluded from all matins, masses, evening prayers, funerals or other prayers, on book or bead (rosary); of all pigrimages and alms deeds done, or to be done in holy church or be christian people, while this curse is in effect."

"And, finally, I condemn them perpetually to the deep pit of hell, there to remain with Lucifer and all his fellows, and their bodies to the gallows of Burrow moor, first to be hanged, then ripped and torn by dogs, swine, and other wild beasts, abominable to all the world. And their candle (light of their life) goes from your sight, as may their souls go from the face of God, and their good reputation from the world, until they forebear their open sins, aforesaid, and rise from this terrible cursing and make satisfaction and penance."
Posted by The Cumbrian Castle listing. at 9:01 pm