The first and last public house on Windermere Road, the Union has probably been opening its doors to thirsty drinkers since possibly around 1834.....a Poor Law Amendment Act was passed in 1834, meaning that Kendal workhouse and Milnthorpe workhouse formed a partnership. This became known as the Kendal Union, and at this time, records show the building at 159 Stricklandgate as The Union Tavern. 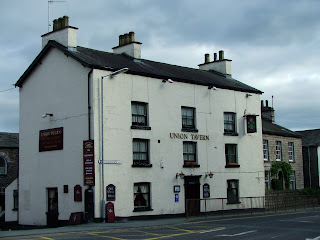 The building itself dates from around 1800, and before its life as an inn, it was used as a Spinning House...otherwise known as a Jack Shop. There is possibly some indication as to how the inn obtained its name here, the Union taking its name from the Union Jack...the flag of the United Kingdom, signified in its hanging sign by the floral emblems of England, Scotland and Ireland. 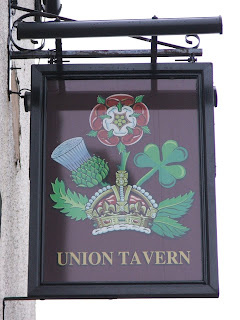 As the name suggests, the Union is epitomised by the presence of the Thistle (Scotland), the Shamrock (Ireland) and the Rose (England) in its hanging sign. 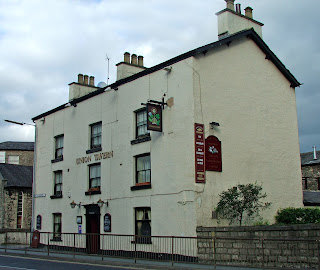 The Union was sold at a public auction in 1847, to its first named landlord, Thomas Tate, for the grand sum of £600. The Alexanders, a brewing family of Kendal owned the building from 1871 until 1947, with only around 10 years break in this period. The stables were still to the rear of the inn up until recently...I'll have to check to see if they're still there.

After being closed for a number of years, from 2013, a victim of the general decline of Kendal's collection of great hostelries, the Union has been re-branded as the New Union Tavern.

Posted by The Cumbrian Castle listing. at 9:51 pm No comments:


The Hyena, situated on Fellside and hidden amongst the maze of backstreets that makes up the area to the West of Highgate, was one of Kendal's smallest inns....challenging the Ring O'bells for the honour of the most bijou hostelry in town! 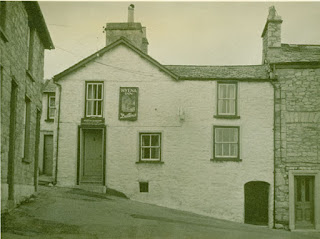 Records show that the Hyena was open for business from sometime before 1834...it was sold at this time and described as "all that newly-erected inn known by the sign of the Hyena". 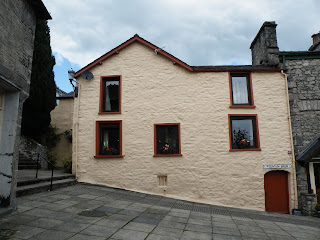 Business continued at the Hyena, known affectionately amongst its regulars, as the 'Tina', until 1966, when the landlord of the day, Martin Dawson, decided it was time to close the doors for good. 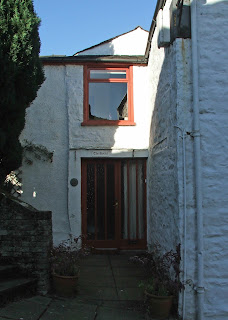 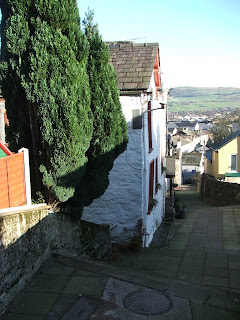 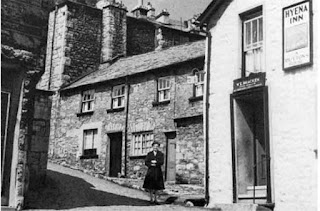 At the time of its closure, Kendal could boast 33 inns, though with the closure of the Hyena, the number of drinking establishments in Kendal was reduced to 32. The building, now a cottage, has survived the building clearances of the 1960s and a great deal of development in the area....another old inn that has managed to survive.

Posted by The Cumbrian Castle listing. at 9:11 pm No comments:


The Wheatsheaf.....one of the first or the last pubs on a good night out round Kendal....depending on which way you went around town!. The difference between the somewhat shabby 2006 pub in the photo below, and the newly renovated building shown in the last photo is pretty amazing. The Wheatsheaf Inn is situated in , next to the entrance to , or the T’ crack. This ancient lane leads past the site of the stable block and the that belonged to the inn. Brendan Jameson was always very dismissive of the green plaque that Kendal's Civic Society have put up at the entrance to the yard....as a youth, he told me that he never heard anybody refer to the lane as T' crack....but we'll go with it for the sake of this post! 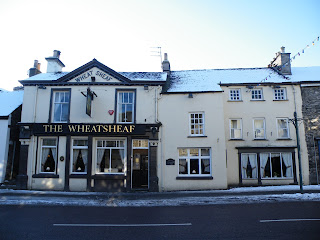 The ancient Kirkbarrow House that is shown on John Speed’s map of 1611, still stands at the end of the lane.  had around twenty three inns and pubs, and the Wheatsheaf was, up until a few years back, one of only three surviving inns in this area. That's a lot of beer-drinking choice for the residents of this part of town!

The outline of the inn and it bowling green can clearly be seen on John Todd’s map of Kendal from 1787. The maypole that would have been the centre of gatherings in , was removed in either 1782 (as stated by Cornelius Nicholson) or 1792 (as stated by J.F. Curwen) Both historians give different locations for the maypole, but agree on the general locality…i.e. outside the Wheatsheaf. The stonework for the base of the maypole was reportedly found buried outside and had to be removed when cutting trenches to make way for gas pipes in 1825. This small stretch of road is indeed wider than the rest of Kirkland....so it may just have been the place a maypole would have been situated? 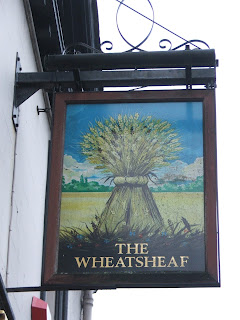 The area that the Wheatsheaf occupied was the most extensive in Kendal, taking up two hundred and fifty four feet from its frontage in , to Kirkbarrow house at the rear. A good percentage of the property held was taken up by the , gardens and according to a for sale advert of 1854 “six neatly arranged cottage houses”. To the rear of this section of the property, was the stabling  for six horses, with access to the stables gained via and . The fact that the inn had stables is a little odd, as it had no rooms for let prior to 1896. It is possible that the stabling was for dray horses, there were after all many breweries in the locality. It’s also possible that the owner during the mid 19th century, Henry Martin, lived in Kirkbarrow, and used the stabling for his family and visiting friends. 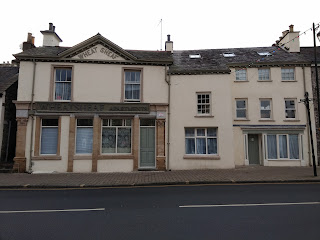 In the1850s the inn had a frontage of no more than 28 feet, with a yard at the North side of the frontage, offering access to the rear of the property. By 1854, the frontage had reduced to just thirty odd feet. From the 1850s to 1896, the frontage was extended to include space taken up by the entrance to the yard. This area later became the Vault Room.

In 1896, under the ownership of Spencers of Whitehaven, the inn was virtually rebuilt at a cost of £2000. Between 1894 and 1897, William Cropper was tenant of the inn, with the owners being listed as Jonas Alexander and Sons. Sometime between 1940 and 1960, the frontage of the inn was again extended, taking over the shop further up the street. This was part of the bar area. In the mid 1980s, another property was obtained, and the bar was further extended.

There is no evidence to suggest that the Wheatsheaf existed before 1728.
Posted by The Cumbrian Castle listing. at 7:26 pm No comments: