Said to be the highest market town in England, Alston possesses a large number of unusual bastle type houses. In all there were originally around sixty of these buildings, typified by accommodation at the ground floor level for live-stock, with first floor accommodation for the owners.  Access to the first floor living quarters was by an external staircase, very typical of the Border, Cumbrian and Northumbrian bastle houses of the 17th and 18th centuries.  Bastle houses proper, were built for safety and defence, utilising removable external staircases, small barred windows, thick walls and sometimes barrel vaulted ground floor spaces. These buildings would have been used for holding livestock when perhaps a Reiver raid was under way, providing protection from the raiders for the owners in the first floor accommodation. Stone\tiled roofs would have protected the owners from the threat of fire from above, and stone floors or barrel vaulted ground floor spaces would have protected them from the threat of fire below. It’s most likely that the bastle building layout proved to be very useful in the areas in and around Alston….so much so that many of the surviving examples date from the 1800 and 1900s….much later than the true bastle houses at Annat Walls and High Lovelady for example, which are proper defensive buildings built in the true bastle tradition.

The original sixty or so bastle derivative houses in Alston has now been reduced to around a dozen examples, but where external staircases have been removed, many houses still bear the scars of bricked up first floor doorways.  The small collection photographed on my recent visit, probably represent the best surviving examples of this type of building.

This is a house very reminiscent of Scottish town houses, standing to four storeys, and dates from around 1697 when it was built as a pair of shops. 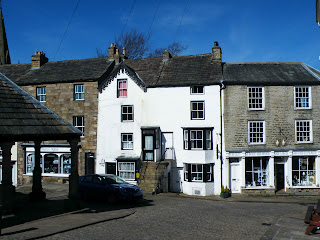 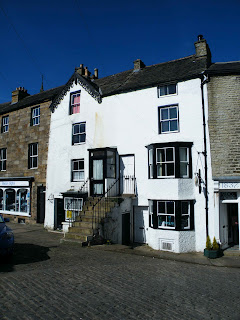 There doesn’t seem to be any evidence that the ground floor was ever used for livestock in the particular instance, so it is likely that this is a building of a slightly different tradition than its neighbours.

Hidden away down a narrow lane less than a hundred yards from Townfoot, Hamilton House has been recently renovated to a very high standard. 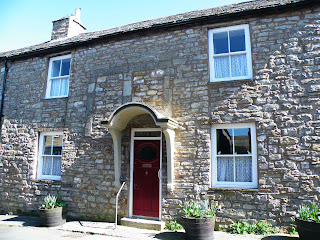 This building is also constructed of coursed rubble with what looks to be an original, albeit very repaired, stone slated roof. The most interesting point, and still visible above the hood moulded door, are the two blocked off first floor doorways. 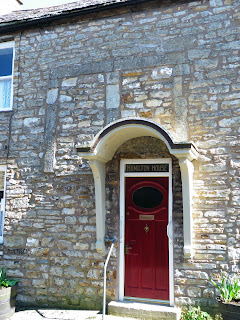 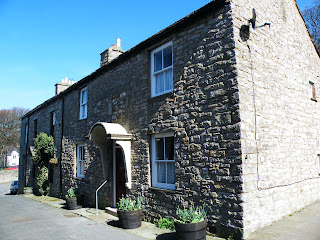 Peter F. Ryder indicates that this building probably dates from the 19th century as it does not appear on a map of 1775. This is therefore an excellent example of a much later house, being built utilising the bastle tradition of layout.


Jaycott, Back 'O The Burn


This was my favourite bastle house, and it has definitely held onto its original features. 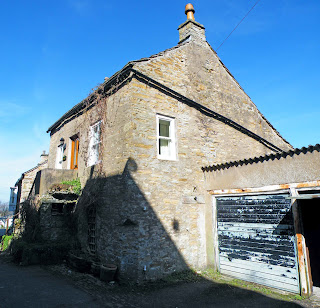 Jaycott is to be found just off Front Street at the start of Back O’ The Burn. Jaycott has retained its external staircase leading to a central doorway and blocked windows just beneath the eaves, as well as a blocked door on the first floor of the South wall. 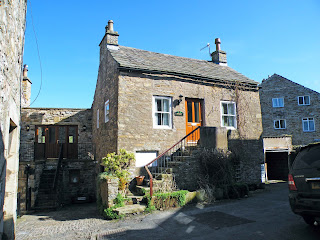 Peter F. Ryder tells us that the ground floor walls are over half a metre thick.


A few yards along Kate’s Lane, and beautifully restored, is the Olde Cottage. The windows, as part of the restoration, have been enlarged, though it has retained its external stair to a door at first floor level. 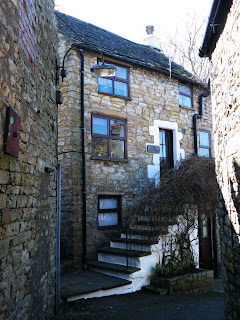 
Kate’s Lane is access through a narrow yard on the West side of the market place. In the North West corner, is the Old House, no renovated and inhabited. 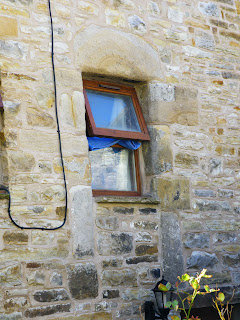 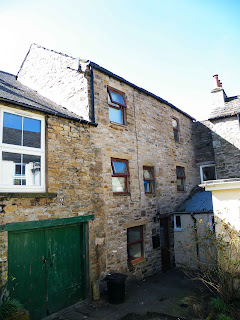 This building has lost its external staircase, but retains the blocked door in the front wall at first floor level.


Townfoot can be found on the North side of Front Street at the junction of Station Road. Probably built in the mid 18th century, it is built of whitewashed coursed rubble with a typical slated roof. 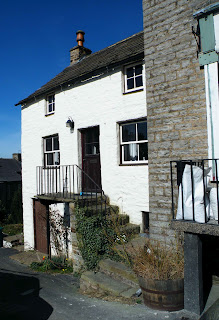 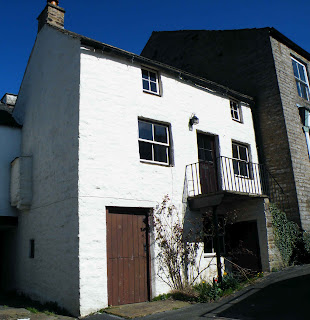 The external stairway survives as does the external evidence of an oven, protruding where the house butts up against next door. This building is Grade II listed, and is one of the most easily viewable of Alston’s bastle houses. 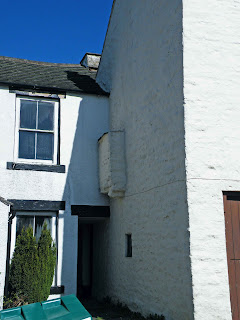 There are obviously better examples of bastles in Cumbria….examples with real defensive features built into their fabic, such as the high status Townhead Bastle near Newbiggin, Bayles Hill House, Low Nest Bastle and Annat Walls (the latter three near Alston)…but as a group of buildings that have obviously been designed and built using the specific architectural features common to bastle houses, they are unique and worthy of study.
Posted by The Cumbrian Castle listing. at 4:29 pm No comments:

Penrith was, during the 9th and 10th centuries, the capital of Cumbria....a semi-autonomous part of the country that paid homage to first the King of Scotland, and then the King of England. The town lies on a direct route from Scotland to England, and as such, was prone to attacks by the Scots. Most notably, in 1345, the Scottish army under Sir William Douglas, sacked the town. How much damage and the number of Penrithians killed in this attack is unknown. A few years later, a 3000 strong Scottish army raided Penrith again, clearing Inglewood Forest of all the live stock that could be found. By 1357, the situation was so bad, that the town of Penrith, and villages thereabouts, could no longer pay their rents to the King's agents. Luckily, Edward III sympathised with their perilous condition, and granted them unlimited rights of pasture in the forest of Ingelwood. A number of years prior to this, in 1346, a grant of murage was given to the people of Penrith. The grant gave a "licence for the good men of Penereth to crenellate their town." This licence was granted on the 10th of April in Westminster. The town's licence was renewed in again in 1391, most likely in response to a further raid by the Scots in 1389. Murage Grants were granted by the King, usually in response to a request, and gave those who received the grant, permission to raise and collect tolls to pay for the building or repairing of town walls and defences. However...it has to be remembered that documentary evidence of a grant, does not necessarily mean that a) the option to raise and collect tolls was carried out, and b) that the town walls or defences were built or repaired. This seems to be the case in Penrith. There's no evidence that the option to raise tolls and collect the dues was actually carried out, and there is certainly no evidence of any walls or earthwork defences being erected. Only street name evidence remains, with the survival of Middlegate, Borrowgate, Sandgate, Nethergate and Friargate. These streets form a rough and incomplete circuit around the centre of the town, encompassing St Andrews, but strangely missing the castle. M. W. Taylor, in his Old Manorial Halls of Westmorland and Cumberland, states that the circuit of narrow lanes, as named above, were probably built to resist attack and unwelcome entry by Scottish soldiers, using the gables of houses and some substantial walling. He goes onto say that some elements of the 'substantial walling' still exist, though having walked this rough circuit a number of times, I've been unable to find anything that looks vaguely medieval that would represent these walls. 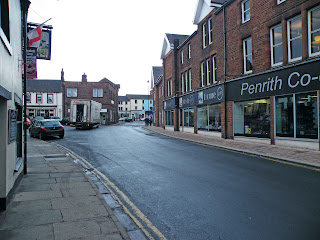 Above. Burrowgate.
144 metres in length. Runs from Middlegate to Sandgate, roughly West to East. 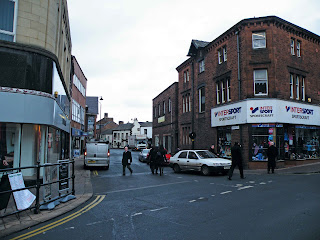 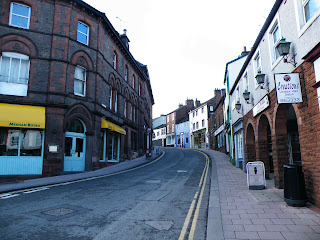 
313 metres in length. Runs from junction of Cromwell Road and Ullswater Road at its South West tip, to junction of Middlegate and King Street at its North Eastern tip. 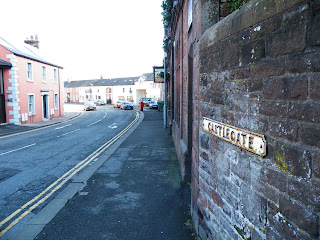 Above. Castlegate, just around the corner from Penrith Castle. 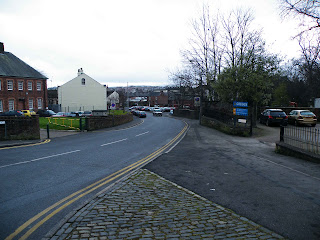 
243 metres in length. Runs from junction of Benson Row and Folly Lane to the North, and the junction of Langton Street and Old London Road to the South. 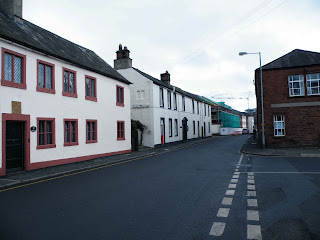 On an Ordnance Survey map of 1923, Friargate is shown as Friar Street, so can probably be ruled out of the search for Penrith's town walls. When, after 1923, the street became a gate, is unknown. Hutton Hall lays at the Northern tip of Friargate. This late 14th century tower may have formed part of the town's circuit of walls\defences, but it's difficult, if not impossible to say if it lay within, or without the town walls. 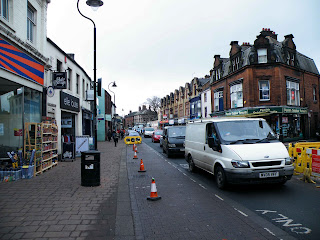 
261 metres in length. Runs from junction of Duke Street and Stricklandgate at its Northern tip, to junction of Castlegate and King Street at its Southern tip. 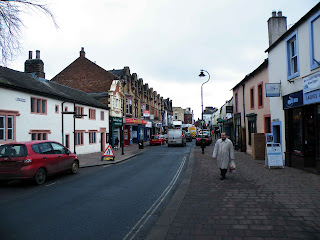 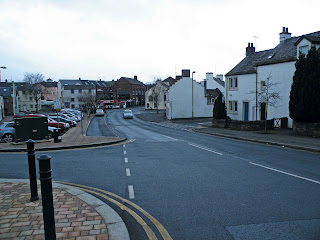 Above. The wide open space of Sandgate.
95 metres in length. Runs from the Eastern end of Burrowgate to the junction of Meeting House Lane and Benson Row at its North Eastern tip. 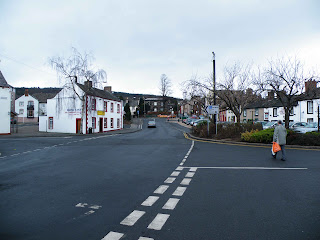 The Penrith Town Trails leaflet tells us that Sandgate, the largest open space in Penrith, was once bounded on all sides by buildings, providing a protected space where livestock and people could safely congregate during an attack by the Scots. Quite where this story comes from, and how reliable it is, is impossible to say.

The idea of a walled Penrith, obviously not as impressive as nearby Carlisle, is intriguing, and certainly deserving of more research and investigation.

Posted by The Cumbrian Castle listing. at 8:00 pm 2 comments: