Above. Good view of the bath house remains, and the wall beyond.

The photo above, shows the excavated remains of a bath house, possibly dating from around 367AD, with a fragment of walling visible just beneath the branches of the tree next to the modern building. 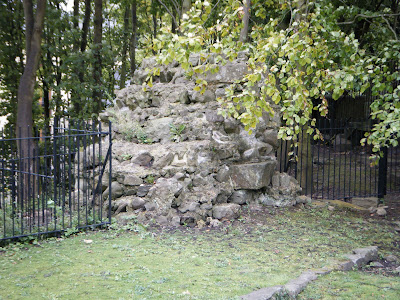 Above. Close up of the remains of the wall.

The fragment of wall is now merely a pile of consolidated rubble....all the facing stones that would once have finished the wall have long since been robbed out, leaving behind a stump of wall, representing the last vestiges of a fortification that would have once surrounded the Roman fort here in Lancaster. 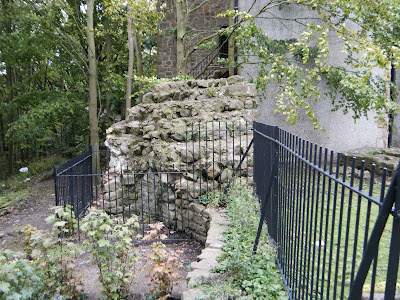 I can't find any reasoning behind the name 'Wery' wall, but it is evident that it started life as part of the Roman fort, and then subsequently may have been incorporated into the Norman fortifications here in Lancaster, and then later still, became part of the early medieval attempt to surround the town of Lancaster with a defensive wall. Historical documents dating from the 11th to the 18th century all mention the Wery wall, indicating its original importance as part of the defences of the regionally important town of Lancaster. Access to the bath house and the remains of the wall is free, and the site is open all day long.

Posted by The Cumbrian Castle listing. at 9:48 pm 1 comment: