I didn't even realise that I had a photo of the original Buittle castle....home to the Lords Galloway in the 12th and 13th centuries. Well here it is....a distant shot, but the masonry remains of part of the castle can just be seen amongst the trees. The more modern Old Buittle Tower is out of shot to the right of the ruins. 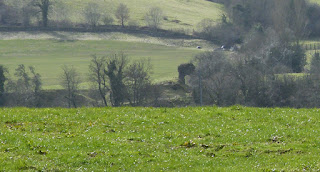 There are some great photos of the remains here, at the Castle UK website. 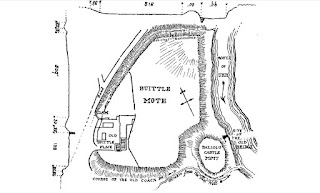 Above. Plan of Old Buittle Castle, from The Motes, Forts and Doons of the Stewartry of Kirkcudbright, by Frederick R. Coles

Posted by The Cumbrian Castle listing. at 7:27 pm No comments:

The Roman fort of Voreda is situated about 5 miles North of Penrith, on the A6 next to Castlesteads farm. It is easily visible from the road. Also known as Old Penrith and Plumpton Wall, this is a large rectangular platform, measuring some 140 by 85 metres with the central platform still standing to a height of around two and a half metres. Excavations around the area uncovered an extensive Vicus, or civil settlement that would have built up around the fort, uncovering finds such as inscribed stones, querns, coins, pottery and extensive evidence of occupation.

The fort was probably inhabited between the 1st and 4th centuries and is so well preserved that some aerial photos have shown the foundations of buildings. The Vicus however is no longer discernable either from the air or on the ground. The fort is built on the Roman road that stretches between Carlisle (Luguvalium) Kirby Thore (Bravoniacum) and Brough (Verteris) Some stretches of the old Roman road can still be see, albeit very very faintly, in fields next to the modern A6.

The Roman Britain web site (Roman Britain) states that the fort was most likely built by The Second Cohort of Gauls, who were stationed in Britain for the whole of the Roman rule of the islands. The area is home to a number of temporary marching camps and fortlets, some still visible. About two and a half miles to the South, the earthwork remains of a tiny fort can just about be made out in the field to the East of the A6.

Though there is no parking at this point on the A6, the road is wide enough to a quick stop off to view the remains of the fort from the roadside.
Posted by The Cumbrian Castle listing. at 8:34 pm 1 comment:

Posted by The Cumbrian Castle listing. at 8:27 pm No comments: