With the recent addition of Fortified Bridges as a category of fortifications to the Gatehouse website, I thought it was apt to add some photos of the Old Dee Bridge. This is a seven arched sandstone structure, spanning the River Dee at the South of the city. It connects Lower Bridge Street to the North, with Handbridge to the South. It is a Grade I listed building and also a Scheduled Ancient Monument. 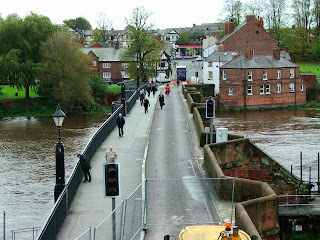 Above. View across the bridge looking South from the top of the Bridge Gate.


The bridge was constructed in stone from around 1387, and was, at the time, the only crossing over the River Dee into the city of Chester. The bridge was therefore an important element in the city defences and for controlling the transport of goods both into and out of the city. 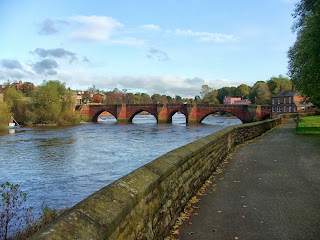 Above. Looking towards the bridge from Southern banks of the Dee.


From a fortification point of view, the bridge originally had a gatehouse and drawbridge spanning the last two piers at its Southern end but the drawbridge was demolished between 1499 and 1500. The gatehouse, perhaps the last element of defence, was removed in 1781. 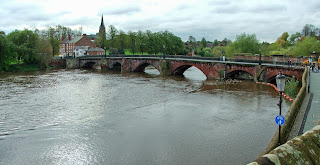 Above. The bridge as seen from the city walls, looking South West.


The stone bridge, erected in 1387, most likely replaced a series of wooden structures, and lays over the route of the original Roman bridge. The bridge was widened in 1826 to allow easier entry and exit of the city by the ever increasing amounts of traffic.

Whilst perusing Google Books looking for some information on Chester's tower, walls and other interesting buildings, I came across this beautiful engraving by Randal Holme from the mid 1600s. 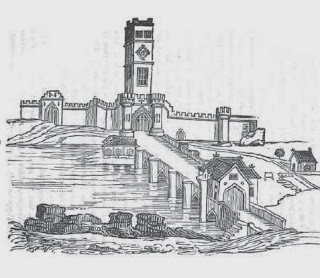 It clearly shows the gatehouse at the Southern end of the bridge with the road running across the bridge right to the doors of town's gate, emphasising how important the fortified aspects of the bridge were to protecting this entry into Chester.

Above. Another fantastic engraving showing the bridge with its towers.

Chester Walls Some great old photos and engravings of the bridge.
Posted by The Cumbrian Castle listing. at 5:43 pm No comments:

Nothing to do with castles, towers or city walls, but another interest I've held for a while, is Kendal's history. I've recently found this link to some BBC web site pages, detailing some of the paintings held by Kendal Town Council in the Town Hall.

Kendal Town Council painting collection.
Posted by The Cumbrian Castle listing. at 8:11 am No comments: