Dunollie castle is built on the headland at the entrance to Oban Bay. The remains consist of a tower house with a courtyard, and traces of a wall circling the summit of the headland. 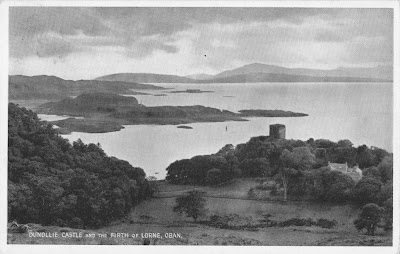 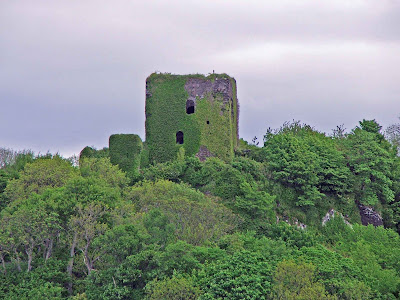 The castle was built in the 12th century, probably by Ewan MacDougall, however the surviving remains of the tower house date from the 15th century. The only remaining portion of the curtain wall, is around 15 feet wide and precariously perched atop the summit. 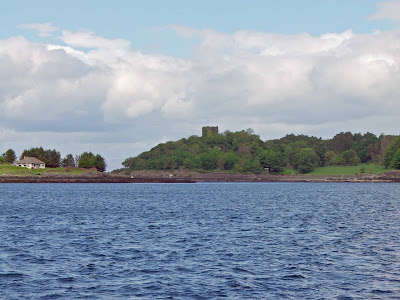 The castle is visible as you sail into Oban Bay, shrouded in trees and covered in ivy and creepers. 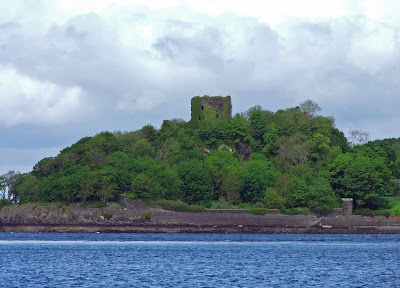 In 1746, the castle was abandoned by the MacDougalls, in favour of Dunollie House just down the road.
Posted by The Cumbrian Castle listing. at 7:39 pm No comments:

The castle of Duart sits on a headland overlooking Duart Bay in the Sound of Mull. The castle is most likely to have been built sometime in the 13th century, although it’s not been possible to date the buildings exactly. When the castle was acquired by the MacLeans in the 14th century, a rebuilding and extension period was undertaken, whereby buildings that were previously erected within the castle walls were demolished, and a substantial tower house was built. 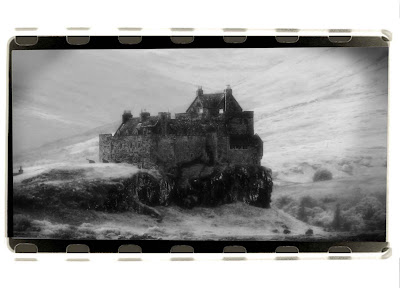 The curtain wall, the kitchen and a well are all that now remain of the original 13th century structure. 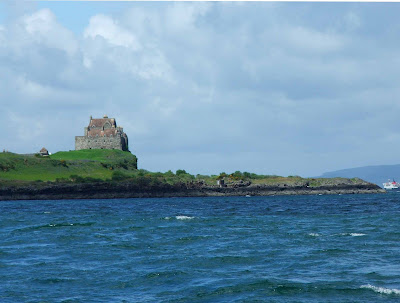 Above. View of the castle looking North West, sailing towards the Sound of Mull.
Further alterations were made in the 16th century, when more accommodation was added at the expense of buildings in the courtyard. 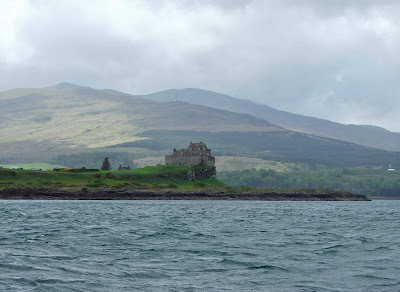 Above. Another view of the castle looking North West, with Dun da Ghaoithe in the background.
In 1674, the castle was bought by the Campbell Earls of Argyll, and was regularly garrisoned with troops. Soon after this time, the castle was beginning to deteriorate, and by 1748, the tower house was roof-less, and many other buildings ruinous. 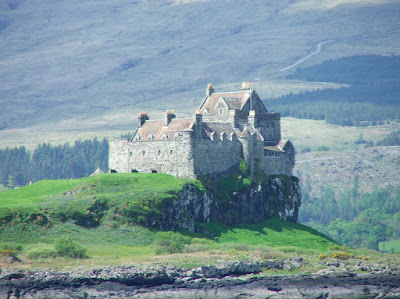 Above. View of the castle looking West.
The castle was re-acquired by the MacLeans in 1911, and was partially rebuilt a year later.
Posted by The Cumbrian Castle listing. at 7:39 pm No comments:

Ardtornish Castle was once the seat of the high chiefs of the Donald Clan, from the early 14th to late 15th century. The castle is sited on a headland in the Sound of Mull, about a mile south east of the village of Lachaline. The castle was possibly built in the second half of the 13th century, and probably abandoned by the end of the 17th century. 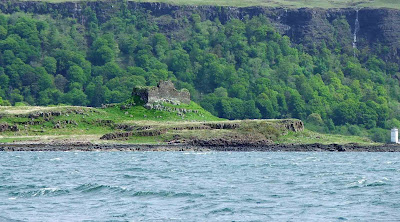 The main ruins that can be seen today, consist of the remains of the Hall house, rising around 32 feet above the sea below it. Traces of other buildings can still be seen on the North side of the hall. A small boat house has been identified, as has a kiln. There are no defensive earth works at the site, either on the sea ward or land ward side of the castle. It appears that the natural position of the castle was enough to ward off potential attackers.The castle was restored between 1910 and 1915, albeit badly, with much of the outer walls refaced. Many of the windows were altered or even blocked up, and many of the rooms that can still be seen are full of debris from collapsed walls and roofs. 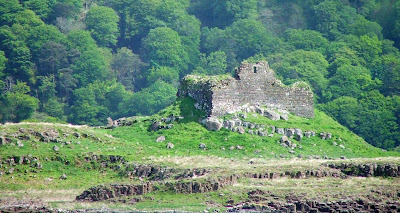 The surviving walls of the hall house are around 9 feet thick in places, and rise to around 16 feet at their highest points. The hall house, shown in both photos here, measures around 55 by 30 feet, and is built upon a rocky outcrop, no doubt providing yet further stability and strength for this well placed castle. Access to Ardtornish was mainly by sea, and the beach is littered with tiny coves and inlets in which small boats could be moored. You are able to get to the castle's remains, but it involves a trek of some seven or eight miles. From Ardtornish village, there is a track that runs along the East shores of Loch Aline. As the headland of Ardtornish Point comes into view, you have to leave the track, and continue South for about three quarters of a mile. The castle lays directly in front of you.
Posted by The Cumbrian Castle listing. at 7:39 pm No comments:

Mayburgh lays just off the B5230, the road that leads to Yanwath Hall. It is set back off the road about a hundred and fifty yards. The henge is visible from King Arthur’s Round Table, the entrance clearly discernable.

The henge is a late Neolithic monument, with the earthworks surviving nearly intact. The encircling bank is nearly 7 metres high at its highest point, and surrounds a flat interior measuring around 90 metres in diameter. The bank is nearly 45 metres wide at its widest point.

The bank is constructed of pebbles probably carried by hand from the nearby River Eamont. The single entrance is on the East side of the bank.

There is a single standing stone in the centre of the remains, although there are suggestions that there may have been as many as eight at some time. It’s rather surprising that the henge has never been excavated. 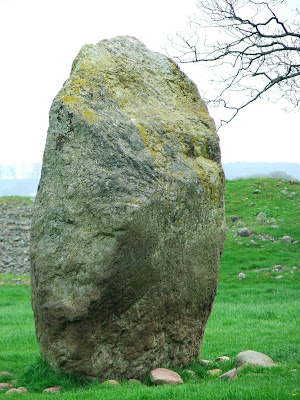 There is ample parking at the foot of the henge and it’s open all year round.
Posted by The Cumbrian Castle listing. at 4:44 pm No comments:

The earthworks of King Arthur’s Round Table consist of an almost circular bank with a ditch that runs around the interior of the remains. Within the remains there is a raised circular platform that doesn’t have any antiquity at all. It is reputed that a local landlord had earth tipped into the centre of the remains for the intention of having ‘tea-parties’ here!!

The remains have been damaged on two sides by the A6 and the B5320, which leads to Yanwath. The remains sit right next to the roads and are readily accessible.There is a clear entrance break in the encircling bank, and it is understood that there was once an entrance also on the opposite side of the earthworks. The second entrance was destroyed when the B5230 was built. This second entrance had two standing stones but these have long since gone.

The only find from the centre of the earthworks, were the remains of a trench, widely believed to have been the remains of a disturbed burial. Nothing of any significance has been unearthed at this site.The earthworks are open all year round and there is parking across the road.

About 200 hundred yards up the road, within the grounds of Lowther Park, lay the remains of Little Round Table.....the remains of a smaller 'henge'. I couldn't find these remains, and will probably return at a later date to search for them again.
Posted by The Cumbrian Castle listing. at 4:44 pm No comments:


Yanwath Hall has to be one of the most beautiful and complete pele towers I’ve come across so far. It sits just off the B5320 about two miles from the earthworks of the Mayburgh Henge and King Arthur’s Round Table. 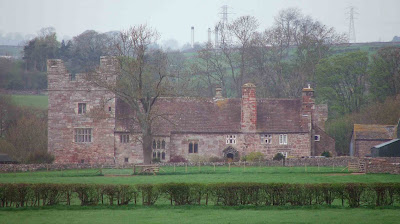 The pele portion of the building is a 14th century defensive structure, joined to a mostly 15th century hall. The tower has had some minor rebuilding done to it during the Elizabethan period, namely the addition of windows at the ground floor. 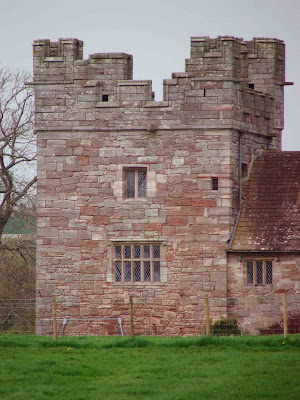 The tower retains its battlements, although the flat roof has been replaced by a steepled tiles roof. The whole structure has a partially enclosed courtyard at the rear, probably dating from the same period as the hall. The courtyard is entered through a 14th century gatehouse. 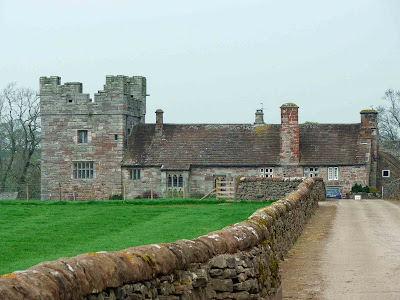 The de Suttons owned the tower through much of the early 14th century, later passing to the Threlkeld and then to the Lowthers. The tower can be approached down a private road as far as the railway bridge. From here good views can be had of the front of the tower and the hall. 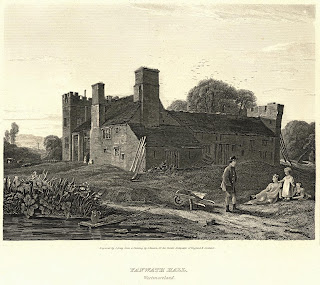 Above. Old print of Yanwath Hall looking towards the enclosed courtyard to the rear of the hall and tower.
Posted by The Cumbrian Castle listing. at 4:30 pm No comments: