Here we are again, reading about yet another Kendal public house that has fallen by the wayside. The Bridge Inn\Bridge Hotel seems to have soldiered on for a number of years, stumbling from one landlord to the next, until 2018, when the inn closed its doors for the final time. There were rumours that it was to be opened as a community pub, but as yet, this hasn't happened. 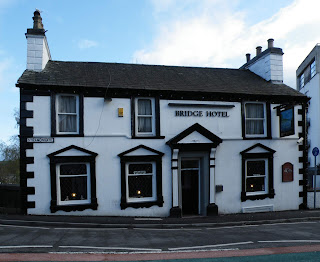 Above. The Bridge Inn\Bridge Hotel in 2006

The inn was originally built as a private residence, in 1738. One of the spout heads bears the initials B.G.A. and the date 1738, believed to stand for Garnett Braithwaite, who, we are told, was the builder and owner. Braithwaite was the joint owner of a mill in the locality. The mill was, at first, a silk mill, then a pin mill, ceasing operations sometime around 1790. 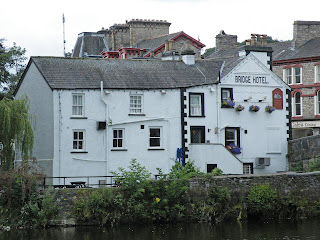 Above. The Bridge Hotel in 2010 from Gooseholme

The house was converted from a residence to a public house sometime around 1830. Brendan Jameson told me that the Bridge Inn did not appear in the directory lists of local pubs and inns before this time, so he concluded that its origin may have coincided with the advent of the 1830 Beerhouse Act, an Act of Parliament that liberalised regulations governing the brewing and selling of beer. The act enabled any rate paying member of the public, to brew and sell beer, the intention being that it would provide healthy competition between brewers, drive down prices, and ultimately encourage people to drink beer rather than strong spirits. 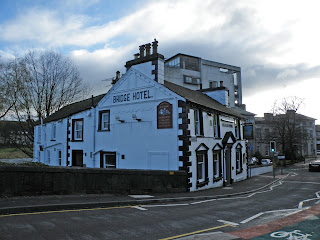 Above. The Bridge Hotel in 2009 from Stramongate Bridge

The Bridge Inn first appeared in the Borough directory of public houses, in 1849, when the landlord was named as John Pollitt. 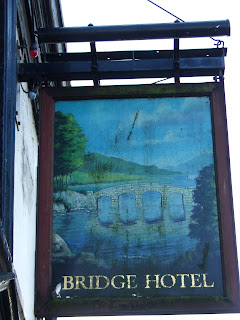 There is a mention of the inn in the Borough records in 1839, when it was reported that it was a meeting place for the local hunt....the licensee at this time being named as Mr Unsworth.

The inn was the scene of a death in 1838, when Agnes Stockdale died there. The inquest was held at the inn, with the Surgeon's verdict given as "Agnes died by the visitation of God".

By the end of the 19th century, the inn was a substantial property, with reports in 1892, stating that it had a dinning room capable of catering for 30 people, three drinking rooms, bedrooms to let, and stabling for around 25 horses. The status of the property was given as 'mixed' though I'm not sure what this related to. At this time, the licensee was given as George Gardner, under the ownership of Kendal Brewers Jonas Alexander and Sons Ltd.

Plans for a total refurbishment of the inn, were submitted to South Lakeland District Council in December 2018, though to date, these plans do not appear to have progressed at all.

Posted by The Cumbrian Castle listing. at 8:14 pm No comments: 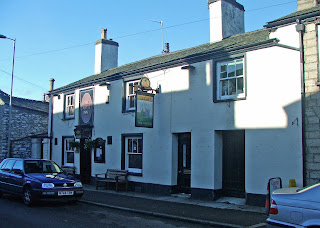 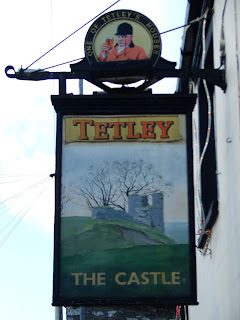 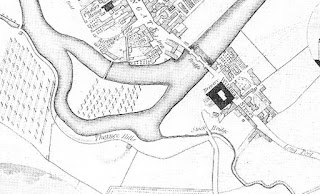 Posted by The Cumbrian Castle listing. at 8:09 pm No comments:

The building once occupied by the Slip Inn is now home to Middleton's iron mongers in the market place. 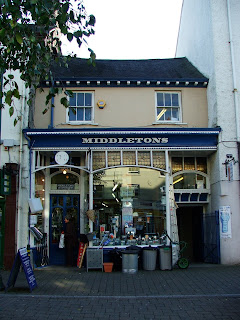 Above. Front of the inn facing onto the Market Place.

Borough records state that the inn was owned by Isaac Kirkby until 1813. The yard running down the right hand side of the inn, the Slip Inn Yard, used to be home to a number of butchers, all with the reputation of leaving pools of entrails and effluent flowing down the yard. 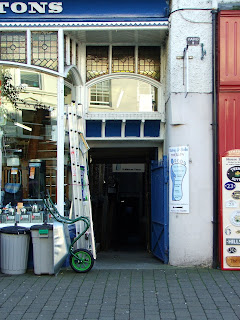 Above. Entrance down the side of the old inn building.

The inn was sold at auction along with the land lord's dwelling house in 1863 when it was owned by William Norman. Drastic changes were made to the frontage in 1865, when the overhanging jetted facade was removed. The Slip Inn ceased trading in 1898.
Posted by The Cumbrian Castle listing. at 7:18 pm No comments: 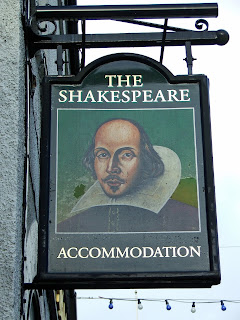 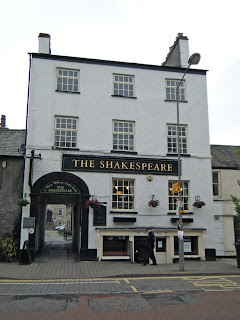 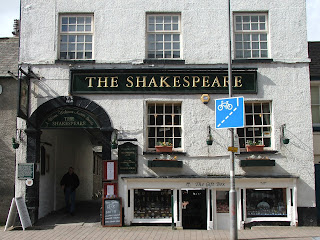 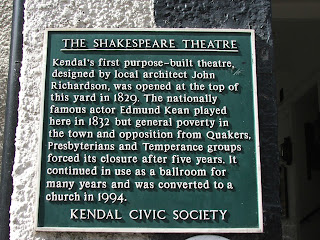 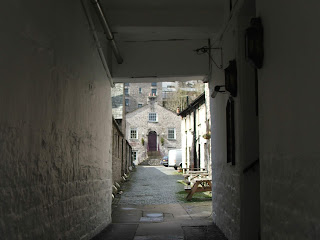 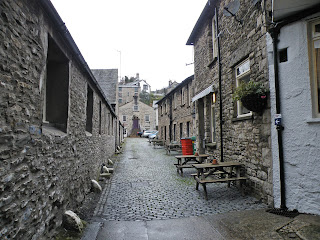 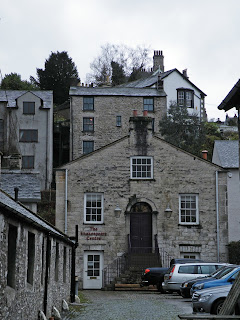 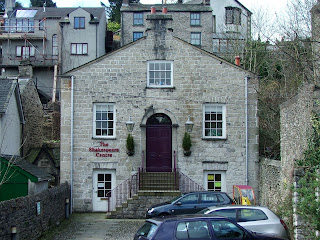 By 1957\58, plans state that only Colin Croft Brewery were in ownership. In 1961, Scottish and Newcastle took over. Another survivor that seems to be thriving.
Posted by The Cumbrian Castle listing. at 6:52 pm No comments:


Generally accepted as one of Kendal's oldest surviving inns, if not the oldest, the Fleece is one of the most prominent survivors of our bygone pub history. According to local guide books and local historians, the date 1654 was found on a panel within the building, lending some tenuous support to the inn's age. It's also one of Kendal's few surviving timber framed buildings. 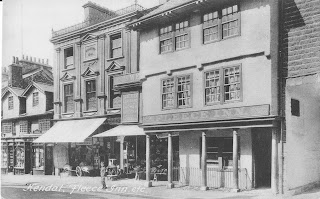 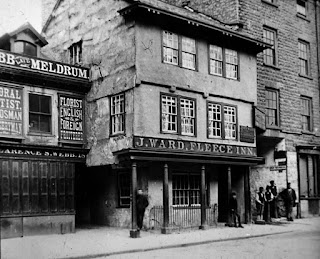 Originally called the Golden Fleece, a reference to the symbol used by woolcombers guilds during annual guild processions, the inn was the starting point for the county of Westmorland's first stage coach service in 1772. 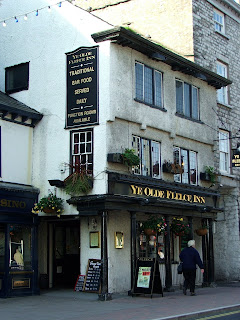 
The Fleece inn is the only building along Strickland Gate that has retained its original jetted first floor, supported on five pillars. Old photos and postcards show many buildings with this sort of facade....all have been removed over the years. 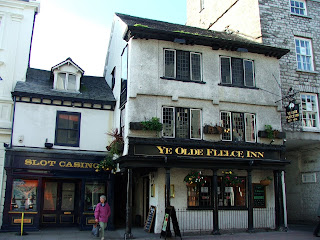 
It seems that, due to the small number of letting rooms available in the past (only six) the Fleece was never really regarded as one of Kendal's main inns, even though it had stabling for 28 horses....a slight imbalance. 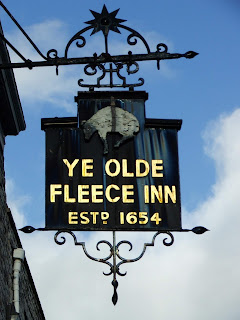 As well as the main building, the smaller building to the left of the Fleece, was originally part of the inn, as were a number of buildings to the rear. Most were used for storage of beer, coal and other goods. 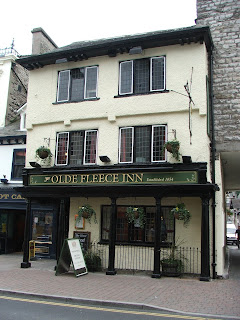 In 1920, the inn was owned by the Westmorland Catering Company Ltd. In 1934, Rowland Hoggarth, previously of the Shakespeare, was the Fleece's owner. He remained there from 1925 until 1934. He sold the inn for around £32,000. During his ownership, the inn's landlady was his wife Martha. 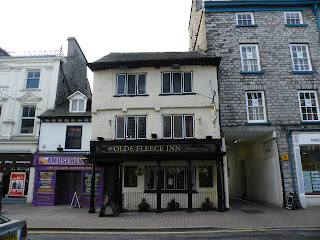 By 1930, the Fleece was owned by North British Trust Hotels Ltd. and it was during this period of ownership, that the Fleece probably became one of Kendal's most prominent drinking establishments. It was so popular, that the owners had trouble finding accommodation for the additional staff. 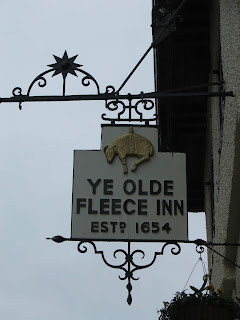 By 1956, the Fleece was owned by local brewers, Collin Croft Brewery Co. Ltd. operating out of Collin Croft just off Beast Banks. The company was sold to Scottish Brewers Ltd. who later became Scottish and Newcastle some years later. 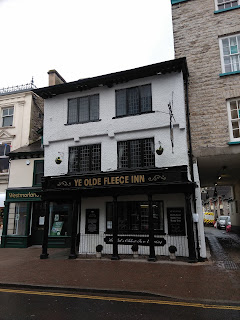 The inn's life during the 80s, 90s and 2000s has been a mixed bag of success, closure, renovation and reopening.....with its final incarnation appearing in February this year with a million pound rebuild resulting in the shiny new inn we see today. Fingers crossed the Fleece doesn't go the way of so many other town centre inns and pubs.
Posted by The Cumbrian Castle listing. at 4:16 pm No comments: