A recent visit to Penrith prompted me to investigate the Duke of Gloucester a little closer, especially regarding the claims that the building contains the remains of a pele tower. 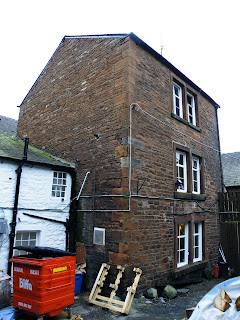 Above. The rear of the Duke of Gloucester.


Well, it appears that the remains of the tower are actually hidden at the rear of the inn, almost invisible from the road at the front of the inn. The tower has been heavily modified and incorporated into the later 16th and 17th century building at the front. It is of three storeys, and measures roughly ten feet by ten feet. As with other towers in Cumbria, all 'tower' characteristics have been removed.
Posted by The Cumbrian Castle listing. at 10:34 pm No comments: