Nestled at the foot of Deepdale Common and Hartsop Dodd, just to the South of Brothers Water, Harsop Hall represents a good example of a large Lakeland house. Perriam and Robinson in their fine book, The Medieval Fortified Buildings of Cumbria, hint at the possibility that this may have been a fortified dwelling, possibly including a tower of some sort, but there certainly doesn't appear to be any real solid evidence to support this. 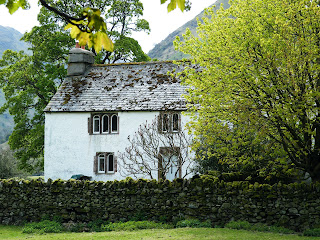 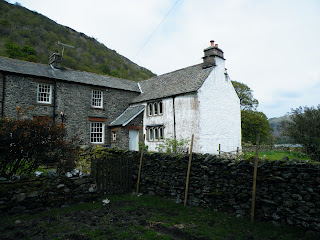 The house was built sometime in the late 16th century, originally with a wing facing Brothers Water, and then in the 17th century, a West wing was added, with an 18th century wing built later.

The hall was originally the possession of the de Lancaster family, later passing to the Lowther estates. Curwen, writing in 1922, stated that the hall was "the former residence of the Bartons of Ormside. It is a little old building say of the 15th century consisting of two blocks at right angles to one another. There is nothing remaining of any note about it." I personally don't think he could have got this more wrong.

The hall can easily be viewed when walking along the West banks of Brothers Water.
Posted by The Cumbrian Castle listing. at 4:08 pm No comments:

Above. View of the hall from the topiary gardens.

Above. Classic view of the hall with the pele tower the second bay from the right.

Above. Another view of the South range from the gardens.


Posted by The Cumbrian Castle listing. at 3:59 pm No comments: