I first visited Burneside Hall in April of 2005...in fact, it was the first pele tower I'd ever seen and it was probably the building that set me off on this quest to photograph all of Cumbria's towers and castles. So it came as a great surprise when I realised that I had no photos on the blog, and no information about this wonderful old tower.

Burneside lies around two and a half miles North of Kendal. The hall and tower of Burneside sit to the North West of the village, and consist of the 14th century ruins of a large pele tower and hall attached to the East of the tower. 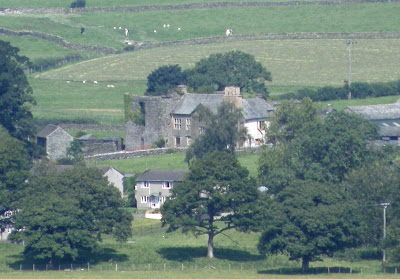 Above. Burneside Hall from Scout Scar (I think!)


Machell's antiquary sketches of Burneside Hall show a three storeyed tower with an embattled roof line. These days it is in ruins, to such an extent that in 2011 it made English Heritage's 'At Risk' register. The tower measures around 13 by 9 metres. The gable walls probably stand to their original height, as does the South wall which borders the hall, whilst the front, or North wall, has largely collapsed down to first floor level. 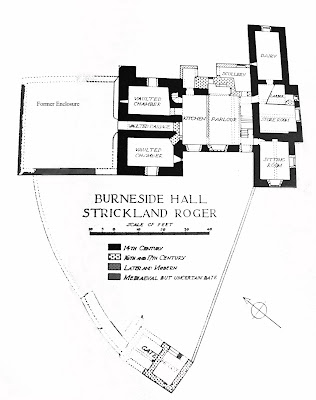 Above. Plan of the tower and surrounding enclosures, walls and gatehouse.

Above. View of the hall showing the ornamental pond and mound on which the tower stands. 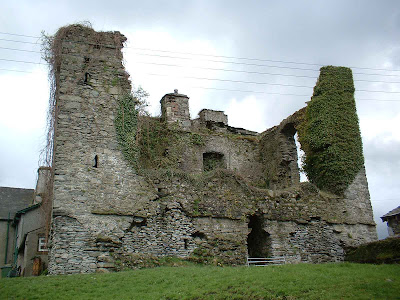 Above. Close up of the tower.


The lower parts of the North wall are formed out of the walls of a former enclosure that is thought to pre-date the tower. Several reports produced regarding the tower here at Burneside make mention of this much older feature, suggesting that the site is much older than the 14th century tower. The difference in building materials can clearly be seen in the photo above. 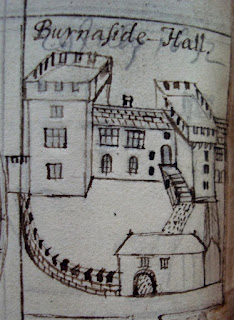 Above. Early sketch of Burneside hall and its attendant buildings.

The enclose, which lies to the North of the tower, was first recognised in the 1936 RCHM survey. It measured some 11 metres square with walls around a metre thick. It stands in places, to around one and a half metres high, and is pretty much complete. 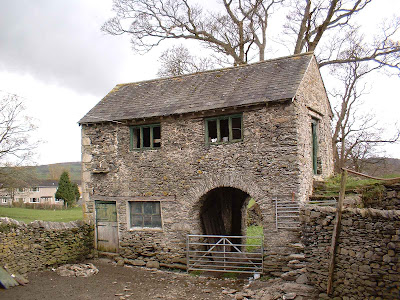 Above. The well preserved gatehouse.


The gatehouse lies to the West of the tower, and was most likely built in the 16th century, and possibly is contemporary with the remodelling of the hall. The original doors, made of oak, appear to still be in situ, although now not mounted on their hinges. It is thought that the gatehouse has, at some point, been reduced in size, as foundations are visible in the grass to the South of its walls. Whether this was due to collapse or deliberate rebuilding is not known. 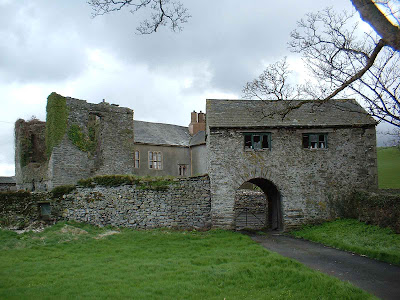 Above. The gatehouse from outside the barmkyn wall. 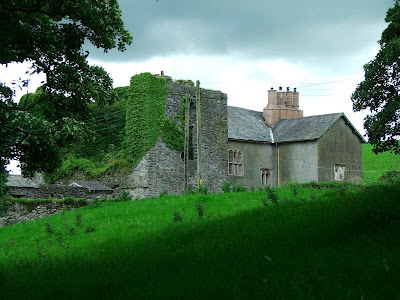 Above. The tower with the hall to the rear.

There are numerous foundation marks running along the length of the wall near to the gatehouse, and Machell's sketches show a number of buildings built against the inside of the wall. There is also evidence of fishponds and other unidentified earthworks to the West and South of the tower.

Great views of the tower can be had from Hall road, though parking is very tricky owing to the narrow roads.


Below. A small selection of old postcards and prints of Burneside Hall. 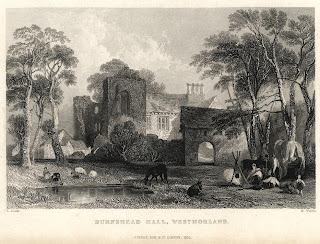 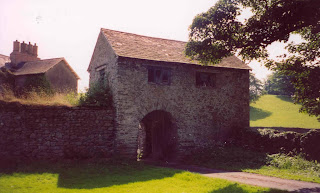 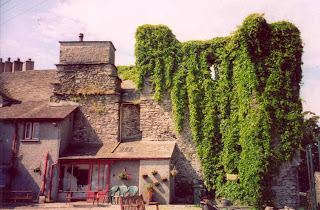 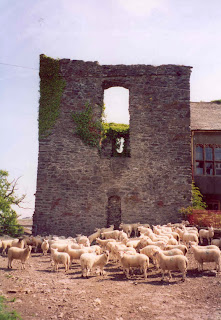 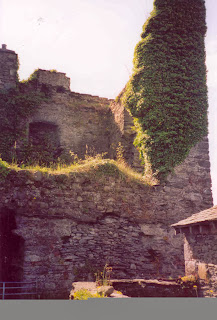 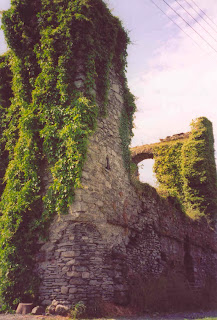 Posted by The Cumbrian Castle listing. at 6:18 pm 2 comments:


Eileen Donan Castle was renstored between 1919 and 1932 by Lt. Col. John MacRae-Gilstrap, who was responsible for the construction of the arched bridge joining the small island of Eileen Donan to the mainland. The island was home to a fort dating to well before the 13th century. During the late 1200s a curtain walled castle was built, probably marking the boundary of the Lordship of the Isles and the Earldom of Ross. It may have been used to prevent or provide early warning for Norse incursions into Scotland. 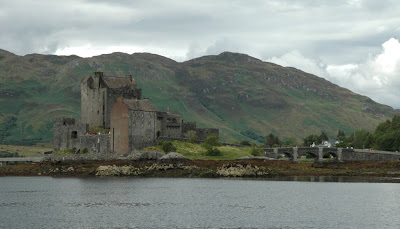 Above. Eileen Donan Castle from the South.


The Mackenzies held the island in the late 1200s (the Earls of Ross) They built a tower house here, an early attempt at a small scale keep. The MacRaes, protectors of the Mackenzies, took over control of the island and its fortifications in 1511, becoming hereditary constables of the castle. 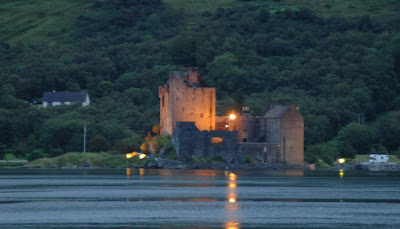 Above. Eileen Donan Castle from the West.


Following the failure of the 1715 Jacbobite rebellion, James Stuart sought Spanish support, resulting the garrisoning of the castle by about 300 Spanish troops. An expected Scottish uprising, and the provision of further troops from Spain never appeared, and it wasn't long before the English navy turned their attention to the castle and its foreign garrison. Three Royal Navy ships, HMS Worcester, HMS Flamborough and HMS Enterprise anchored off the island with the intention of offering a surrender, but when the Spanish troops opened fire they began a destructive bombardment of the castle. A landing party soon captured the island and the castle with very little opposition. Huge amounts of ammunition were found in the castle's vaults, and the Royal Navy spent the next few days destroying the castle and its defences.

More photos and information at the Undiscovered Scotland web site.

Posted by The Cumbrian Castle listing. at 8:39 pm 1 comment: 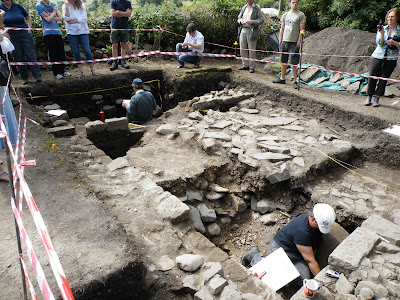 Above. 'Digger' up to her neck in it! 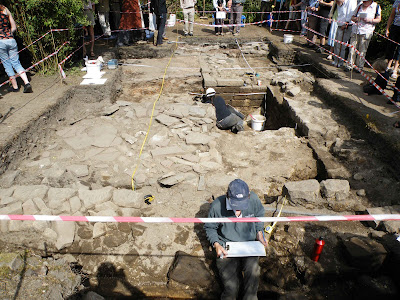 Above. The long slow laborious process of documenting the finds. 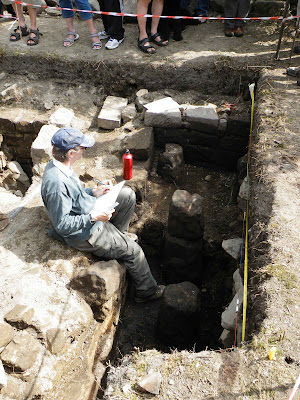 Above. And here he is again. 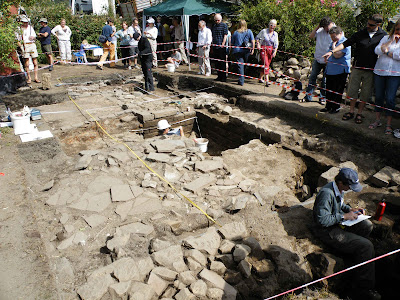 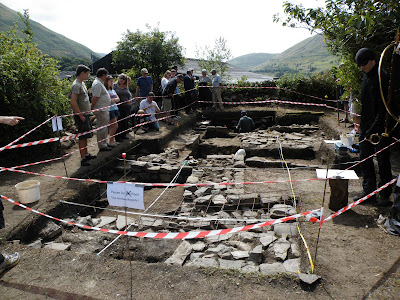 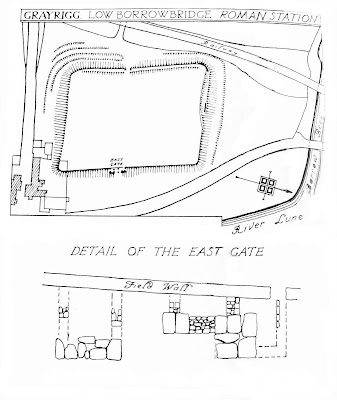 Above. Plan of the fort.

Above. The West gateway from inside the fort.

Above. An inside\outside view of the fort from the top of the earthen bank.

This photo shows the inside of the fort to the left of the bank, and the defensive ditches to the right. I think the stone walling on top of the original Roman defensive bank was probably robbed from any standing walls that were, apparently, still visible prior to the outbreak of World War I. They will probably have been cleared to allow the field to be ploughed and planted for the war effort. I think we can probably forgive the farmer for this!!

Above. A view of the interior of the fort from the North West corner looking South towards Blease Fell.

Above. The gateway in the Western side of the fort.

Here there are still faint earthworks, possibly suggesting the site of two small buildings just either side of the modern gate. The gateposts are standing on top of two huge slabs of stone, possibly contemporary with the fort.

Above. Looking North towards Jeffrey's Mount.

Above. The South West corner of the fort, looking North East with Powson Knott in the background.

The man in the foreground gives a good idea of the height of the surviving external bank upon which the modern field wall is now built. It must be in the region of thirteen feet high. It must therefore have been much higher when it was originally completed, possibly with a wooden palisade on top adding further height and safety.

Above. Looking North whilst standing in the foot of the ditch.

Posted by The Cumbrian Castle listing. at 7:35 pm No comments: