One of 26 towers built around the Roman city of Deva Victrix can be found at the junctions of Newgate Street, Pepper Street and Souters Lane. The tower most likely dates from the end of the 1st century AD or the very early 2nd century AD.

Above. View of the foundations of the tower from Pepper Street.


The tower was constructed on the inside of the walls rather than projecting beyond the walls. This would have afforded it all the protection that the stone walls could provide, whilst still giving the Roman guards stationed there, great views out over the lands beyond the city. For added defensive protection, there was a twenty foot wide and nine feet deep ditch in front of the walls. 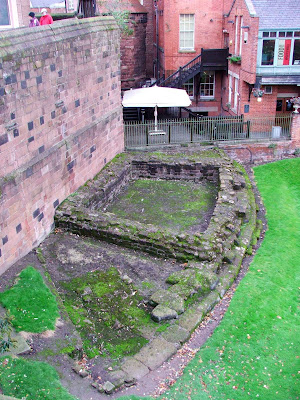 Above. View of the foundations from the Medieval walls.


The tower is seemingly contemporary with the walls, as both structures are bound together with no difference in building materials or breaks in build. Chester was some 20% larger than any other Roman fort in Britain, even larger than York and London. Some historians have suggested that this could point to Roman intentions to make this their British capital. The nearby amphitheatre is the largest military amphitheatre in Britain.

Posted by The Cumbrian Castle listing. at 8:27 pm