Interior photos of Clifford's Tower
York
Yorkshire
I thought I'd include some of the photos of the interior of Clifford's tower in York. These were taken during my May 2010 visit, and until now, haven't been used on the web site.

Above. Looking South East over the gatehouse tower, towards the University of York.
This is my favourite view from the wall walk high up on the tops of the tower's walls. The gatehouse can be seen in the centre of the photo, with its tiled and steepled cap. The gatehouse contains a staircase to the upper floors, built into the thickness of the walls, and there are two more spiral staircases to the left and right, again, each built into the thickness of the walls. These provide access to the passages and rooms built within the walls, and also the wall walk three storeys above. 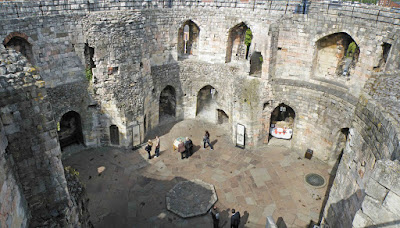 Above. Looking down into the interior of the tower.
Looking down from the wall walk high above, the interior of the tower appears to be an empty void. Originally however, the area shown in the photo above, and those below, would have been under a roof, and would have contained rooms...kitchens, living quarters, a hall and store rooms. Now all we see as proof of this long lost collection of domestic rooms, is a single octagonal column base, which would probably have provided a central strong point for floors and roofs.

Above. A view at ground floor level towards the North West of the tower.
The walls over the gatehouse house a small chapel, with arcading set into the walls. Such were the cramped confines of this relatively small castle, that when the portcullis was raised, it was projected into the chapel, and would have obscured the decorative wall. 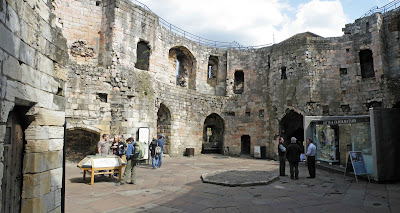 Above. A view at ground floor level towards the gatehouse.
The entire interior of the tower is accessible for a small fee, and the climb to the summit of the motte is well worth the effort. Make sure you take the time to walk around the wall walk, as the views out across York are fantastic.
Posted by The Cumbrian Castle listing. at 6:44 pm