Lowther Castle Stead
Lowther
nr Askham
Cumbria
The earthwork remains of Castle Stead lay about a quarter of a mile north of Lowther castle, and overlook the River Lowther from the top of a high cliff. The remains of this medieval fortification are one of a few in this small area. To the West is Askham Hall, a 14th century pele tower. 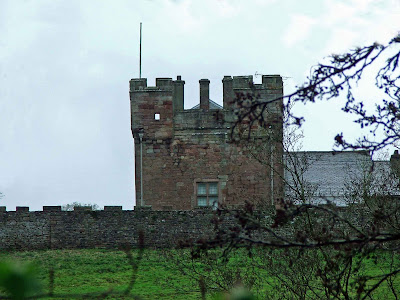 (Askham Hall from the river side. Yes I know....a poor shot, but believe me, the hall is incredibly difficult to photograph.)
A few hundred yards up the road is the small village of Askham....a defensible village.

To the south are the remains of Lowther castle, incorporating both 19th, 13th and 17th century towers and halls. 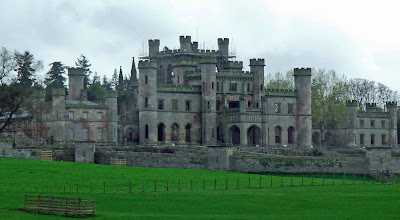 It has been suggested that these remains represent the remains of a pele tower, possibly dating from the late 12th century. The earthworks are rectangular in shape, perhaps 60 feet by 20 feet and stand to about 6 feet in places. 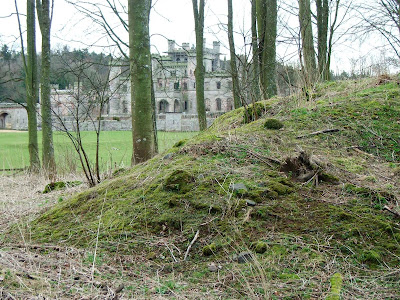 The earth banks appeared to consist of a mixture of earth and rubble, and in places mature trees were growing from the remains. Each side of the enclosure was broken in half by a gap, perhaps 6 to 8 feet in length. There didn't appear to be any features in the centre of the site.

General consensus is that the position that these remains occupy, represent a good site for a tower, possibly a pele tower. Indeed, the point at which the current road bridge crosses the river Lowther, is very shallow. Here the water flows over a slick river bed made of solid stone. On a normal day, the water here is only a matter of a few inches deep. 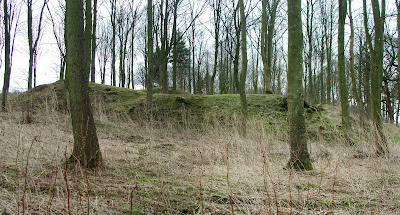 A map of 1863 clearly shows a square enclosure on this spot, labelled as Castle Stead. The site is obviously of some antiquity. It is easily accessible too. The footpath leading to the remains, can be joined opposite the church of St Michael. Alternatively, you can make the steep scramble up the hill side from the road to the remains.

Posted by The Cumbrian Castle listing. at 6:53 pm