Dacre Castle
Dacre
Cumbria
The village of Dacre lays just south of the A66, East of Penruddock, and West of Stainton. The area is literally over flowing with pele towers and castles. Within 5 miles of Dacre, Dalemain, Catterlan, Johnby, Hutton-in-the-forrest, Greystoke and Blencow, to name but a few, can all be found.

Above. A view of the castle from the North, with St Andrews in the background.
The Dacre family were medieval landowners in this area and the church of St Andrew just across the beck, contains the remains of a sandstone effigy that probably depicts a Dacre knight from the 14th century. 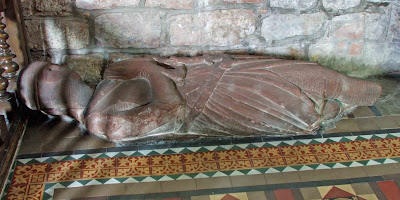 Above. An effigy of a Dacre Knight.
This small castle probably dates from the late 14th century, and most likely replaced an earlier tower, dating, in turn, from the early 1300’s. The castle sits at the side of a small roadway, which fortunately is a right of way, and affords excellent close up views of the castle. Portions of the moat can still be seen, specifically, the northern corner of the moat, and a small portion to the south of the tower, now landscaped. The rest has been filled in and lays beneath the road. (This pathway\road incidentally, eventually leads to Dalemain, some 2 miles to the East) 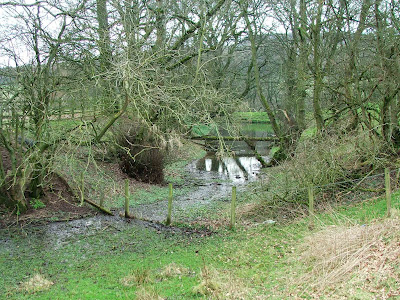 Above. The moat to the West of the castle.
The earlier building on this site, was so badly destroyed by a Scottish raid in 1317, that it required a complete rebuild. It is probably this building that we see today, dating from around 1354, when Margaret de Dacre was granted a license for the castle chapel. 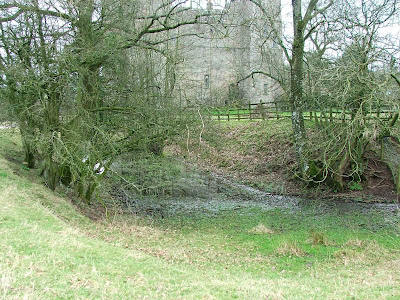 Above. Another view of the moat to the West of the castle.
Many of the walls are up to 2 and a half metres thick, and built of the locally familiar red sandstone. There are four towers, three of which are almost identical, with the North East tower slightly larger. The crenellations now give way to steepled roofs, but they would once have been flat. The Dacre family crest can be seen over the doorway, but owing to the amount of greenery in the garden it was impossible to get a good photograph. 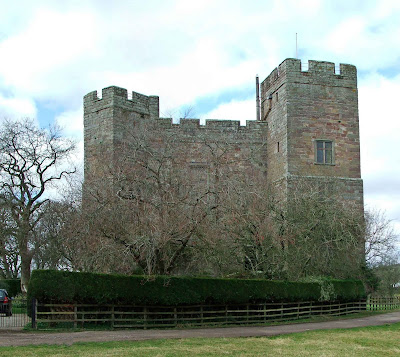 Above. The castle from the East.
The castle remained in the Dacre family until the death of Lord Dacre, Earl of Sussex in 1715. The castle and the extensive lands that went with it, were purchased by Sir Christopher Musgrave. Musgrave’s daughter Julia married Edward Hasell, who was then granted the Dacre estates. These grants of land and property were absorbed into the Dalemain estates under who's stewardship they remain to this day. 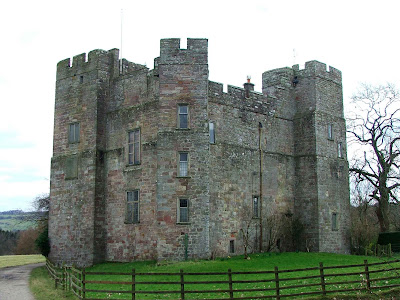 Above. The castle from the North West.
The castle is shown in an engraving of 1739, as ruinous with vegetation growing from the top floors and the roofs. It found use as a farmhouse during the latter part of the 18th century. In 1961, the castle was restored sufficiently to be inhabited, and has thus remained a home to this day.

The castle lays a few hundred feet from the buried remains of a pre-Norman (Anglo-Saxon) monastery. This site was raided by Vikings in around 875, and then rebuilt in 926. Extensive archaeological excavations have found the buried remains of at least 200 people, clearly indicating a site of significant importance. The cemetery was probably disused for a long period of time, and eventually the whole site was superceded by a church on the site of the present St Andrews across the beck.

As mentioned before, the castle is easily accessible via the public right of way that runs alongside the gardens and the remains of the moat. From here, great views can be had. A few hundred yards to the North West, the church of St Andrews lays, with its carved bears and 12th and 13th century architecture.

North East BBC news mentioned that it is now vacant and the owners are looking for a tenant!

Who are the agents and what is the rent?

You mentioned "Margaret" in part of this blog.Would she be Margaret Multon that was married to Ranulf (Ralph) De Dacre? They were my great,great x 18 grandparents.I'm doing my family genealogy and would like to learn more about them.

Yes, that is the correct Margaret you are mentioning. I ran into Dacre Castle doing my Lancaster geneology.