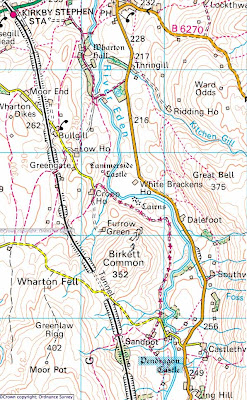 This tiny scrap of a castle occupies the beautiful West side of Wharton Fell a few hundred yards from a bend in the River Eden as it passes through the valley and on towards Pendragon. 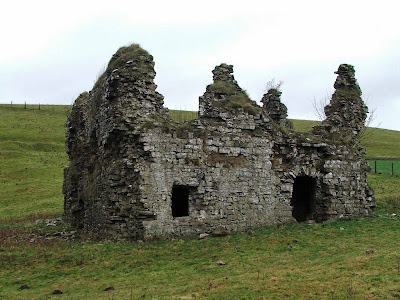 The castle is off the A683, and down an open fell road leading to Croop Farm, a private residence but with free public access to the field in which the castle is situate via a public footpath. 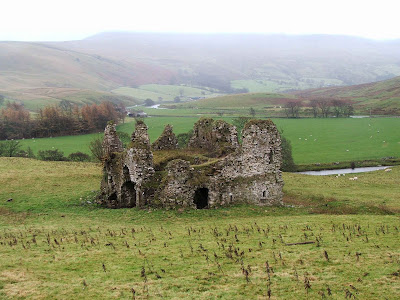 The footpath takes you right up the castle, giving you the opportunity to explore the remains here, close up. What you will find is a small tower surviving to second floor height in most places. Most of the walls survive to around one and a half metres thick, and the remains are around 14 by 11 and a half metres square. 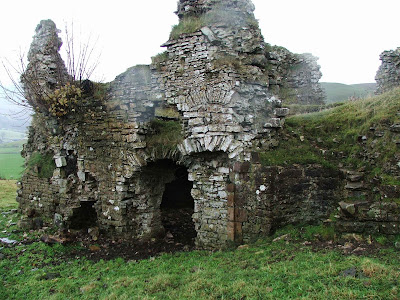 It’s obvious from the amount of rubble buried beyond the tower walls, that there were other buildings here, possibly containing a hall. There are also the earthwork remains of a barmkin wall, which would have provided an enclosed yard to the West of the tower. aerial photos on the Visit Cumbria web site show the extent of the earthworks surrounding the tower to great effect. 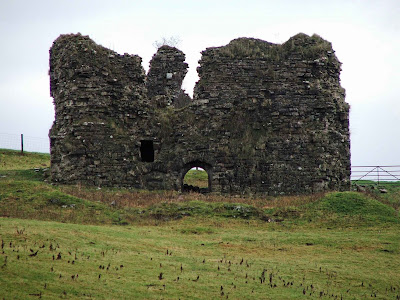 Probably built sometime in the 1300’s the tower and its attendant buildings may have been built by the Warcops, with a branch of the Wharton family occupying it until the late 1400’s. 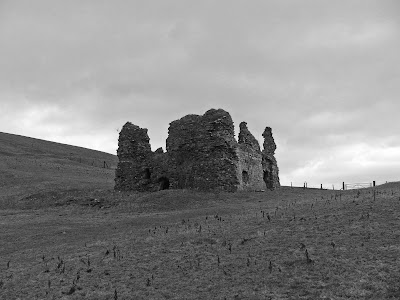 The Warcops are associated with a tower of Lambersete in documents dating from 1404, detailing Thomas de Warcop’s part in the abduction of Margaret de Sandford, aged only nine years old, so that he could marry her. The abduction was carried out by Roland de Thornburgh on Thomas’ behalf. Later documents state that Edward V, in 1462, stipulated that Thomas Warcop should pay the amount of “fyve marc sterling” to Thomas Sandford, possibly a relation of Margaret’s. Whether this payment formed some sort of punishment for Margaret’s abduction, isn’t known. 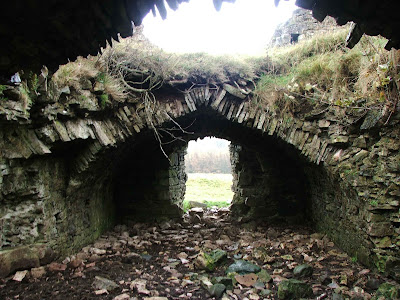 The tower still retains its superb vaulted ceilings on the ground floor, and these can be seen upon entering the tower. Much, if not all, of the outer stone dressing has long since gone, whether removed or simply fallen away over the years, giving the outer walls a very rough look. The base of a fallen spiral staircase can still be seen in one wall. 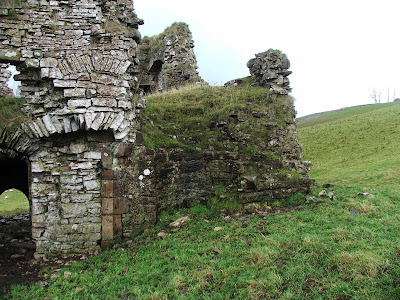 The valley of Mallerstang is a beautiful place to visit on any day, even just for the scenery, but with the addition of Pendragon and Lammerside (Wharton Hall cannot be visited!!) it makes for a great place to spend some time. Lammerside and Pendragon are linked by the public footpath, and only about two miles apart.
Posted by The Cumbrian Castle listing. at 6:06 pm

I've just been browsing your blog and enjoyed reading about where you've been. I'm sorry to contact you via a comment box but I was hoping to send you an email, and couldn't seem to find an email contact on the site.

Is there any chance you could email me on paul at dedicate dot co dot uk ?