Pendragon Castle
Mallerstang
nr Kirkby Stephen
Cumbria
The remains of Pendragon castle lay about 5 miles to the South of Kirkby Stephen, on the B6259. The road winds its way along the bottom of Mallerstang valley with the river Eden at its side, and the spectacular Mallerstang Edge cutting the skyline to the East of the castle. The valley is home to three main fortified buildings: Lammerside Castle, Wharton Hall, and, most spectacularly, Pendragon Castle. 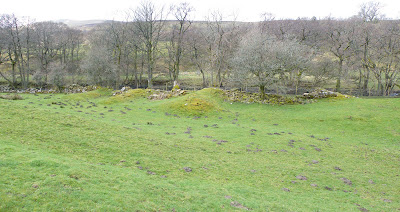 The remains of the little castle, sit on the summit of a small spur of land that juts out over the river Eden below it. The earthworks stand to around 12 metres high, with the solid remains of two causeways breaking the ditch that encircles the castle. Indeed, the ditch\dry moat that runs around the castle is around 3 metres deep and some 7 metres wide. Legend has it that Uther Pendragon, the legendary eponymous builder of the original castle, tried in vain to redirect the river Eden into the castle’s moat, but failed at every attempt. 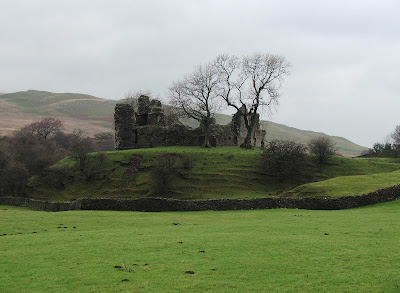 The masonry remains are quite substantial, but what has been lost along the way is even greater. The walls stand to between 2 to 4 metres thick in places, demonstrating the defensive capabilities of the building, and still stand in places to second floor height, but mainly to ground and first floor. The third and top storey of the castle has long since collapsed, mostly filling the interior with rubble. It is this masonry ‘rubbish’ that forms the floor over which you have to clamber once inside the castle walls. 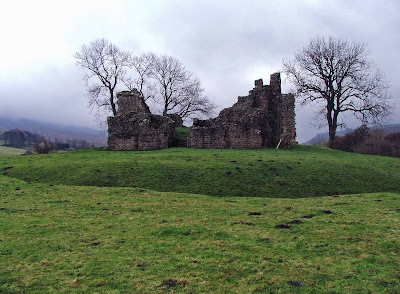 The interior of the castle would have been partitioned off into smaller rooms, both at ground level, first floor, second and third floors, but all interior\dividing walls have long since been dismantled or have collapsed. 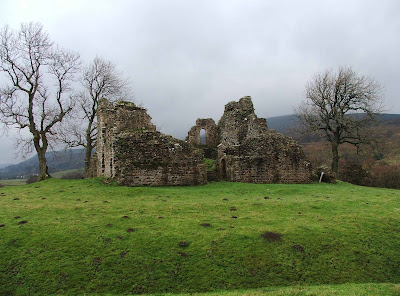 Much of the outer stone cladding has been removed over the years, possibly for nearby buildings, but probably on the instructions of previous owners for more substantial and regal buildings elsewhere. 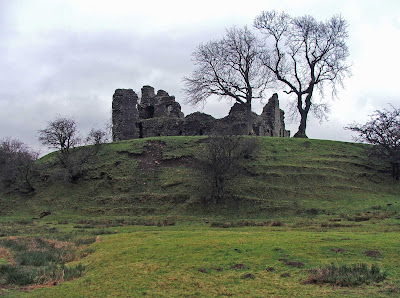 The castle is thought to date from the latter part of the 12th century….possibly from around 1173. Hugh de Moreville is thought to have had ownership of the original castle, from around the late 1170’s or early 1180’s. What part of the remains represent this early castle is hard to tell, but the remains are substantial enough, and diverse enough to suggest that rebuilding, renovation and expansion have been an ongoing part of the castle’s history. Documentary evidence exists telling us that the castle was restored to the ownership of Hugh de Morville’s nephew, Robert de Vipont in 1203, with ownership then passing to Robart de Leyburne in around 1269. When de Vipont died in 1283, the castle was mentioned in documents as ‘the castle of Mallerstang’. 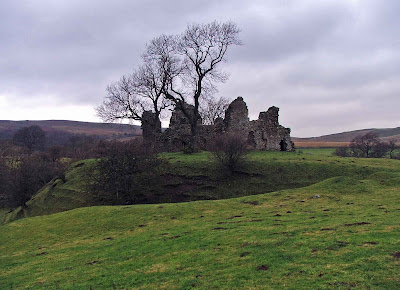 For the most part, the castle we see today probably dates from 1309, when a licence to crenellate the tower was granted to Robert de Clifford. The licence was granted by Edward II, and was probably as a result of a request by Robert in view of Scottish attacks on the area. Ownership of the castle was forfeited by Roger de Clifford to Edward II, when he was captured by Edward’s army at the battle of Boroughbridge. However, ownership was restored to the de Cliffords in 1323. 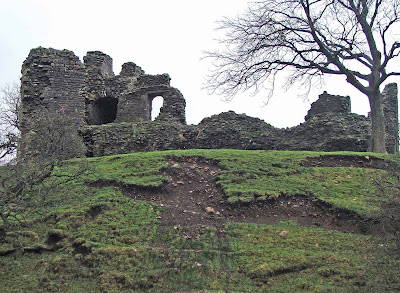 An attack on the castle in 1341 by the Scots, caused so much damage, mainly by fire, that it was largely abandoned until around 1360 when it was rebuilt and extended. The corner turret that stands out from the South West wall, was probably built at this time, by Robert de Clifford. The castle remained inhabited until 1541, when a fire again damaged the castle beyond repair. It wasn’t until 1660, that it was restored again, this time by Lady Anne Clifford. 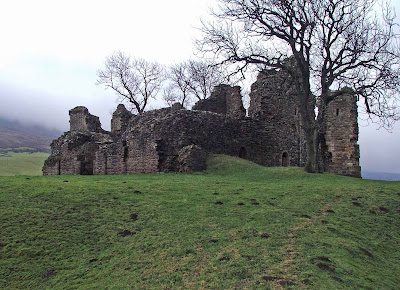 The inconspicous mounds of earth shown in the first photo of this post, may represent the remains of the footings\foundations of stables built by Lady Anne Clifford. The castle enjoyed over 20 years of care and attention, until it was partially dismantled in around 1685, by the Earl of Thanet, Lady Anne’s successor. The castle was superfluous to requirements, and masonry, lead and timber were removed and used in the upkeep mainly of Appleby Castle. 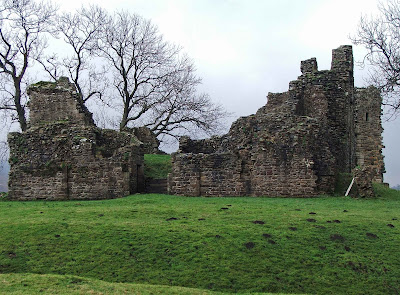 Today the castle sits in a quiet and remote part of the Cumbrian fells, with hardly any passing traffic and only the odd walker for company. Although it’s sited on private land, access is allowed. The surrounding field, moat and the interior of the castle are fully accessible.
Posted by The Cumbrian Castle listing. at 8:43 pm

I first came across this place many years ago whilst on holiday. Having a keen interest and "digger" with my local historical society my father and I got into conversation with some people on the site. At the time the doorway was visible but the interior was almost full of rubble.No sign of the stairways for instance.

In chatting the gent present turned out to be the owner. Apparently he owned land in the next valley and bought some more land only to find part of it had a castle on it!