On the South side of Flowergate in Whitby, sits an unassuming inn called the Little Angel. The inn was probably built in in the latter part of the 18th or early part of the 19th century, but may hide the remains of a 12th century castle. The Images of England web site states that the inn may have some masonry from a 12th century castle hidden away within its core. What it doesn't explain is where this information comes from.....whether or not the masonry is from a castle that was on the site of the present building....or whether the masonry has been bought from another site. There are the remains of two castles to the North of Whitby, not forgetting Scarborough to the South. The two sites to the North are Mulgrave Castle, a 13th century stone castle, and Lythe Castle, an earthen motte and bailey castle. Maybe some masonry was removed from either one of these two sites and used in the building of the predecessor to the Little Angel. 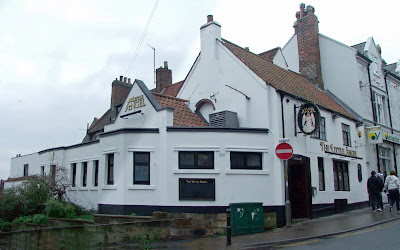 Philip Davis of the Gatehouse web site seems to be 'fairly' happy with the siting of this building as a castle, but there seems to be no information on the internet about its authenticity. When the town was smaller, and not so built up, a castle in this spot would have had a good view of both the estuary and the harbour, and would have been well placed to control both land based and water based traffic. 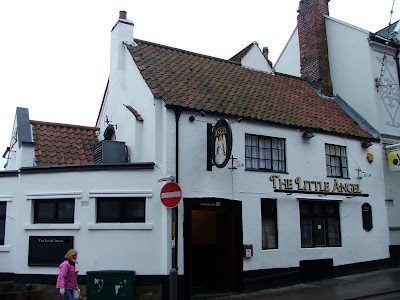 I have been in touch with Whitby museum to see if they have any further information regarding the rumours of a castle in Whitby. Their reply was interesting:

"We have heard this rumour as well, but do not have evidence to substantiate this claim. It is possible that someone assumes a castle because of the 'soke' at Flowergate in Domesday Book...but since Whitby had an Abbey it is rare for there to be a castle as well." A 'soke' incidentally, was the district over which Soke jurisdiction was exercised, a Soke being the right of local jurisdiction\feudal rights of Lordship over an area. So...it could be that the association of Whitby with a 'castle', could purely be down to the entry in Domesday book, and nothing more. I've also been in touch with the chief Archaeologist at the County Council regarding any architectural evidence for a castle allegedly contained within the Little Angel Inn.....his reply was that he thought it incredibly unlikely that there was any masonry in this building older than that placed there during its initial building in the late 18th, early 19th century. Is this another castle claim blown out of the water?
Posted by The Cumbrian Castle listing. at 11:58 pm

I'm not so much happy as this as a location of a 'castle' as unable to dismiss the possibility. What sort of castle, if any, there may have been here is also something it's not possible to certain about. An early timber castle? a later small tower? Clearly a legend of castle masonry is not firm evidence but this would be worth historical and, possibly, archaeological investigation. A job for Time Team perhaps.

I just stopped in to have a look around since you mentioned Mulgrave Castle.

I came across the same info about Florun castle Whitby when I was doing some other research and its got me hooked but there is nothing on the net about it. Most articles refer to a piece in Yorkshire Life magazine January 1954 by J R Harrison. I have tried to get hold of a copy but have had no luck.

Mulgrave is WEST of Whitby, not north. If you go north from Whitby you enter the sea.

The low masonry wall at the south of the site bounding Brunswick Street with the (very worn) parish boundary stone is known locally as the last remains of Florun/Flora Castle. Here: http://pics.mdfs.net/2008/03/080313.htm