The hall and its attendant buildings lie about two miles West of Sedbergh, less than a hundred yards off the A684 (the main road between Kendal and Sedbergh)

The site consists of a group of buildings reputedly based around the remains of a 16th century tower house. What is seen today is the result of early 19th century renovation and rebuilding by Kendalian architect George Webster, and subsequent redevelopment in the last two years, turning the ‘hall’ into a number of individual dwellings. The hall burnt down in 1928, but the recent redevelopment has turned this site into prime residential property.

Some documents stat that the original tower was at the North end of the site, with a hall range and an additional cross wing at the South end. The tower and all the buildings were said to have been in a serious state of disrepair when George Webster redesigned the site, and the hall had, apparently all but disappeared. The cross wing has been incorporated into the main house\building. George Webster's fanciful interpretation of a pele tower is easily identifiable ….with its tall cylindrical stair tower and overly exaggerated high crenellations. 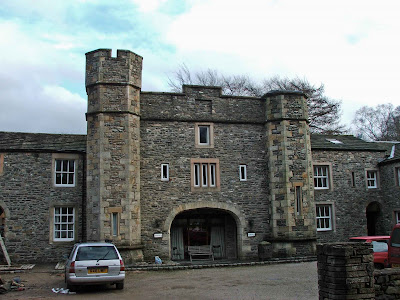 There is still the old gardeners cottage at the entrance to the hall’s grounds, with its tower and crenellations still intact. This was a later addition, designed and built by George Webster, and therefore has no connection with the original tower and house. Inspection of the site and the grounds, probably in relation to the redevelopment, showed no significant archaeological finds of any kind. 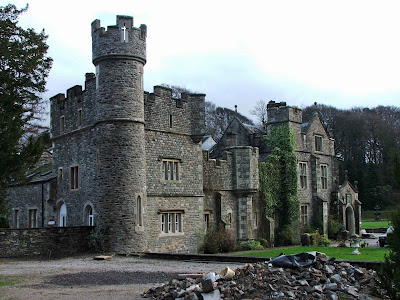 The hall is now in private hands, but a footpath does run along the driveway and through the end of the gardens, offering fairly good views of the pele tower and the rest of the buildings.
Posted by The Cumbrian Castle listing. at 9:56 pm