The small village of Milburn lays about 3 miles to the East of Penrith, and just off the road these days called Mill Lane. The village is set out around a four and a half acre green, with houses built in a single row down each side and at the ends of the green. There are some excellent photos of Milburn on the Visit Cumbria web site. These photos clearly show the lay out of the houses, and illustrate how, even today, the village retains its original layout to a high degree. 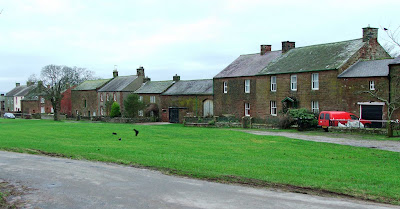 Milburn is one of only three sites representing defensible villages in the old county of Westmorland. The others being Askham and Temple Sowerby. Each village still retains some, if not most, of the original layout.

The layout at Milburn consists of the four and a half acre green, with rows of stone built cottages all around the green. Most of the cottages are still joined.....only in a few places have buildings been demolished and replaced with free standing properties. This continuous row of buildings would have formed a very basic barrier to livestock getting out, or being removed by raiders, and to raiders gaining entry in the first place. Most of the cottages would have had tiny windows facing out from the green, and possibly no ground floor windows either. The small windows may have been designed to prevent entry by anyone planning a raid, but may just as easily have been simply to prevent heat escaping from the houses in this windy and cold part of the county. However...and this is the rub...there are barely any remnants of 17th century houses that would have formed the original 'domestic ring of stone' around the green. Most of the properties now date from the mid to late 18th century, and many more reflect a great deal of rebuilding that took place during the 19th century. Lucky for us though that these periods of rebuilding followed the original village plan. 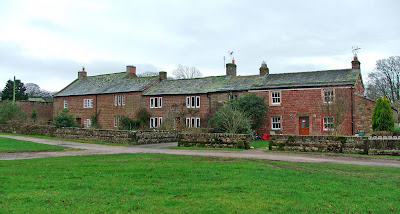 Anywhere that there was a gap, for example in the corners of the green, a fence could simply be erected at nightfall or during the winter months....thereby preventing or at least deterring anyone from attempting to enter the village, and preventing livestock from wandering away.

It's plain to see that this type of defence would not have withstood even the most lightly armed and determined army....but groups of mounted raiders, as so often seen on the English and Scottish side of the border throughout the middle ages, would probably have had a tough job gaining entry, and then escaping with cattle and other livestock.
Check out Simon Ledingham's aerial photo. It clearly shows how the village is set out, around the central green.
Posted by The Cumbrian Castle listing. at 6:41 pm