The small church of St Columba, which dates from the 12th century, backs onto the remains of a moat in the field behind.

Above. St Columba.
The moat is still fairly well defined, with earthworks surviving to a depth of about 3 feet. 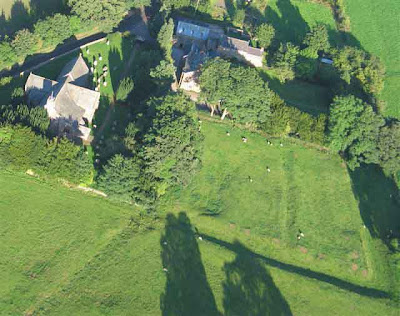 (aerial photo of moat courtesy of Simon Ledingham)
The moat has been obliterated by the vicarage to the East, but about two thirds still survives.

Above. The moat viewed from the church yard.
There is documentary evidence of a castle in the small village, but it's not thought that this would have been situated at this site behind the church.

Above. The moat viewed from the road side.
J.Nicholson and R.Burn, in their History and Antiquities of the counties of Westmorland and Cumberland, state "The vicarage house hath been anciently moated round, including the garden, orchard and outhouses....with a drawbridge at the entrance." Likewise, W.Parson and W.White, in their History, directory and gazetteer of the counties of Cumberland and Westmorland, state "The vicarage was rebuilt a few years ago, and appears to have been anciently moated around." Nicholson and Burn's account was written in 1777, and Parson and Right's account in 1829. Historical documents state that the vicarage was moated due to its close proximity to the Scottish boarders.

The moat can be viewed from the graveyard behind the church, although the undergrowth is very thick.

Posted by The Cumbrian Castle listing. at 4:12 pm