Millrigg is one of those great houses in Cumbria that hides the fact that it may once have been more than simply a house. It sits about half a mile from the A66, and about three quarters a mile north of Temple Sowerby. The house sits on a gentle rise, overlooking the river beneath it. It's thought that the house was built in 1597, possibly as a small tower or 'strong house', for Henry and Bridget Birkbeck (as named on a date plate above one of the doors) The same year, the house was sold to John Dalston, who's initials appear on yet another plate above a door at the rear of the building. The Dalston coats of arms also appear above the same door. The house may have an earlier core, although details of the building pre-1597 seem to be almost non-existent. 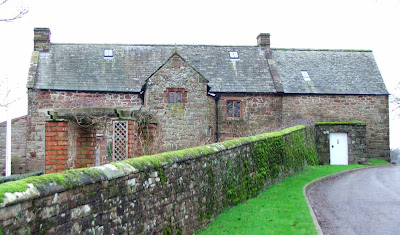 From the outside, this looks like one single building, though an interior examination by Peter Ryder, showed that there were possibly two buildings butted up against each other. The building has retained many original features, such as door lintels, windows and fireplaces.

The house is private, but can be viewed clearly from the nearby road.
Posted by The Cumbrian Castle listing. at 3:39 pm