Cowmire Hall is situated about 3 and a half miles South West of Kendal, and just off the A5074. The Hall consists of a huge three storey house built in the 1690's by Richard Fleming, and an early 16th century pele tower incorporated into the rear of this house.


Approaching the hall from the East, the huge 17th century house is the first visible part of this site. Built to 3 storeys, the house towers above surrounding outhouses, and with its soft creamy coloured facade, it stands out against the greenery. The tower is built onto the Western or rear face of this house, with all but one outer wall swallowed up by the later building. Probably built by the Briggs family in the early 1500's, this is most likely one of the last pele towers\tower houses to be built in the area. The tower's walls are around 1.25m thick, with perhaps a storey in height missing from the top. The tower may have been built more as a prestige building rather than a defensive structure, much like Skelsmergh Hall near Kendal for example. There is a Cowmire Hall pew in the nearby church of St Anthony on Cartmel Fell, alluding to a connection between the Briggs family and the church. The pew demonstrates the importance of this family in local affairs, being totally enclosed with a screen of single light divisions and decorated to a high degree. 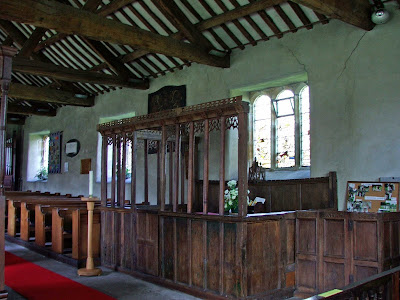 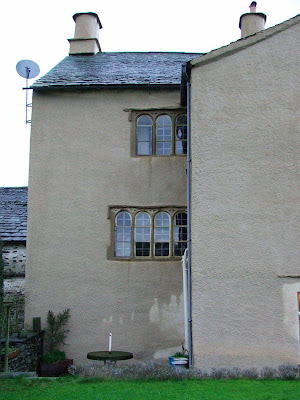 The tower now sits over two storeys, with two barrel vaulted rooms in the basement area. The East wall is completely built into the 17th century external house wall, and it is here that the depth of the walls can be seen. The stair case is a later addition to the tower, probably replacing a spiral staircase. The windows also serve to demonstrate the true thickness of the tower's walls, with the three and four light windows probably being original. 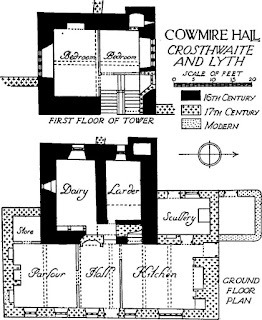 Above. Floor plan of Cowmire Hall.

Whilst some documentation states that the tower has probably lost a storey, possibly with the tower's embattled walls being removed, a drawing by Machel, dated to the 17th century, clearly shows the tower with a gabled roof and still of three storeys. This would, in effect, remove the tower from the 'pele' tower clasification, and force me to see it more as a lightly defensible tower....part of a larger range of buildings....probably built more for prestige than for defence (as mentioned above) 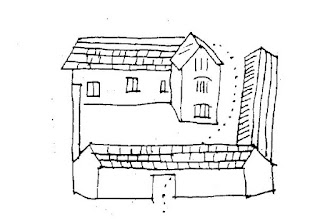 Above. Machel's sketch of the hall and outbuildings.

Machel's drawing also shows the tower as part of a larger group of buildings, with an L shaped building to the right and in front, in which a gatehouse appears to be situated. There is some suggestion that the square-raised garden area in front of the house, could be the original manorial enclosure....originally hidden behind a barmkyn or curtain wall...much the same as Beetham or Nether Levens, although on a much smaller scale. 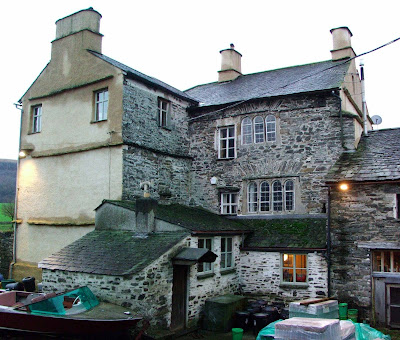 The upstairs bathroom utilises the original guarderobe that was, until a few years ago, sealed off from the rest of the house. The guarderobe can be seen from the outside as a small projection from the North West wall, with a tiny window, probably once a vent, still visible. These days, after some conservation work on the property, the site provides living accommodation for the owners, rented accommodation in the 'Bothy' in the yard, and premises from which the current owners, the Barratt's operate their Damson Gin company.

The owners were very kind in affording me some of their time to show me around, and to point out items of interest.
Posted by The Cumbrian Castle listing. at 4:10 pm