Possible pele towers in the South Lakes area.
There are a number of buildings in the South Lakes area that are either built on the site of pele towers\towers, or contain masonry from these old buildings. Such was the obvious perceived danger from cross border raids, that the number of fortified dwellings in the area is quite amazing. Some of these buidings survived in one form or another, whilst others were evenutally dismantled, and the fabric used to build new dwellings with no defensive capabilities.

There are three, such buildings in Kendal alone, Benson Hall, Cunswick Hall and Helsfell Hall, both with well documented defensive characteristics, but now no more than houses incorporated into working farms. In the case of Helsfell Hall, even the location is up for debate. Meanwhile, in Grayrigg, another current building is reputed to either contain some masonry from a pele tower, or to be built on the site of a pele tower.

Cunswick Hall lays West of the A591, and South of Cunswick tarn. It's likely that the current house contains masonry from the dismantled pele tower that would once have sat behind the gatehouse that still exists. The pele tower was built sometime in the late 16th century by the Leybourne family, who owned the site until the 1800's. The house is said to contain some of the oldest glass in Westmorand, mounted in a 16th century mullioned window...possibly from the earlier tower. The gatehouse, at the South end of the farm yard, is in excellent condition, but I was unable to access the farm to take any photos of it. 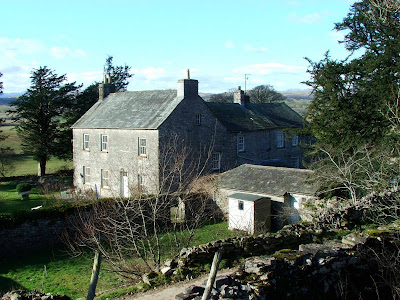 A footpath runs right alongside the farm yard, affording excellent views of the house.

The site of Helsfell Hall is a matter of great speculation. There are three possible sites for the original fortified hall\pele tower. The first speculative site, lays just South of the Plumgarth's roundabout, and to the West of the A591. The current farmhouse, shown here, is probably not the original Helsfell hall. It is in fact a late 17th century house with the familiar Westmorland round chimneys. 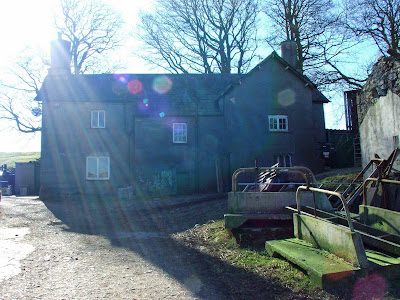 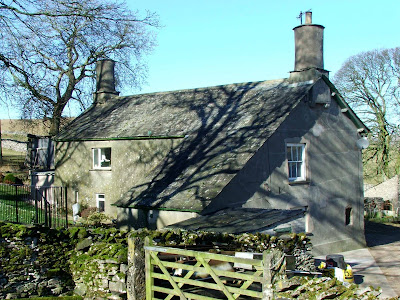 The second site is a barn that lays about a mile and a half to the South, in a field above the A5824 that runs from Plumgarth's roundabout into Windermere Road above Kendal. This barn was probably built in the late 16th century, was definiately inhabited at some point, and is still intact and used by the farm for storage. This building has the original windows with moulded labels, now blocked and thick walls, and may have represented the original hall with its light fortifications.

I haven't visited the 'barn' yet, but as soon as I have photos of it, they will be posted here.

The third site, and marked on late 17th century, and early 18th century maps as Helsfell, is at the top of Windermere Road and at the foot of Kendal Fell. There are no original buildings here now, but the site has been redeveloped recently and is now occupied.

Helsfell Hall (wherever it may originally have been) was home to the Phillipson family, a locally landed family. It's possible that the only remains of the original building, are some original re-set mullioned windows (relating to the present Helsfell Hall) Probably the most famous (local) son of the Phillipson family, was Robin Phillipson, known as Robin the Devil....so called after he rode into Kendal Church on horseback, whilst chasing an adversary, Colonel Briggs, and losing his helmet and sword on the way out as he was set upon by the church congregation (so legend has it!!) The sword and helmet are still to be seen today, mounted high up on the church walls.

Grayrigg Hall, about 200 yards north of the A685 in Grayrigg, is a mid 18th century farmhouse, either built on the site of an earlier fortified house, or incorporating the remains of it. The original building was the home of the Duckett family. 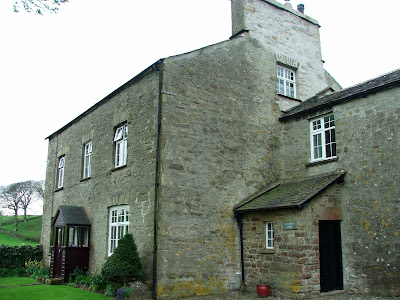 The Remains of John Briggs, published in 1825, describes Grayrigg Hall as "now in ruins, was a strong manor house, of a quadrangular form, belonging to the Duckets". It was also described as "adapted more for defence than for convenience".....indicating that it wasn't just a house or a home to the Duckets, but a possible place of refuge for them. In 1777, it was described as "totally in ruins, most of the lead and timber thereof, being removed to Lowther". It seems that, in 1670, Anthony Ducket sold the hall and the Grayrigg estates, to Sir John Lowther, and upon his death, the Ducket family name became extinct in the Westmorland area....the hall soon falling into disrepair. 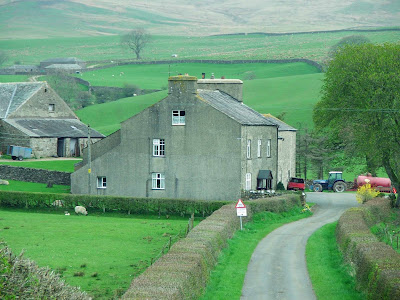 I haven't visited Benson Hall yet...but as usual, as soon as I have, I'll post the photos here.

Posted by The Cumbrian Castle listing. at 10:39 pm

I come from a very old Westmorland family of the Lake District the Phillipsons or Philipsons. My great grandfather was George Phillipson who emigrated to South Africa with his brother William. George and William had a sister Mary and their father was William born 1775 at Sutton Hall. Any information would be greatly appreciated.

The seat of the chief of the family was Belle Isle But they were first seen in Kendal and they owned the greater part of the Lake Country. I dont know if any homes of theirs are still standing, but would appreciate info if possible. George Phillipson owned STUDLAND in Simonstown, Cape Town. South Africa which today is an historical Monument.

To connect with the right family my family crest is 5 ostrich plumes on a mural crown and the motto fide non fraude. any buildings where my family lived and that are still standing a picture would be greatly appreciated.

My grandfather; James philipson was born at Troutbeck. My cousin researched our family tree in the 1970/80s and I have details of the family back to the early 1700s. My fathers name was George Christopher Philipson and mine is Christopher Philipson. I have no idea where exactly James was born but I do have a photo of him in Seaforth Highlander uniform and the undated picture was taken in Ireland! He settled for a while in Kent and he married my Grandmother Lilian Vile at Boughton Aluph church near Ashford. I know that he farmed near Bromsgrove, then Leigh in Kent, and then Landford in the New Forest during WWI. He then returned to East Sussex and farmed at Arlington, Littlington, Willingdon and Jevington in the Eastbourne area until 1939. Some of my second cousins lived in Southern Rhodesia and then Zimbabwe up until 20 years ago but may now be in South Africa or Belgium.

I was very interested to read the comments by Chris Philipson. My maternal grandfather was Christopher Philipson , an older brother of James Philipson. I have only just discovered that Christopher had a wife, Annie Lucinda Beattie and children from that marriage that he had kept hidden from his second wife and six children in Australia!!. James and Christopher were both soldiers and were the sons of Robinson Philipson and his wife Grace, nee Wood from Lythe , Westmorland. I would like to make contact with you Chris Philipson , and would like to see the photo of James. I only have one small photo of Christopher taken in Australia 1935.
regards, Neil Chisholm, Melbourne
Australia. email: louiseluluchiz@gmail.com

My father Douglas Philipson and our family emigrated to Canada in 1956 from near Penny Bridge and Sparkbridge where he worked in his father, Charles's bobbin mill. My great grandfather was Thomas Philipson. We are related to the former Philipson of Calgarth Hall. My father published a book detailing his experiences of working in the Sparkbridge bobbin mill as a young lad of fifteen until it closed.