Waitby Castle is situated about a mile and a half West of Kirkby Stephen, and about a quarter of a mile East of the small village of Waitby. The remains are hidden, surprisingly, on the top of a hill, that overlooks the now disused railway embankments. From the roadside, the fort, for that is really what it is, cannot be seen, so maps and a little guesswork were essential in finding the remains. This involved crossing walls (carefully) and climbing the steep hillside. 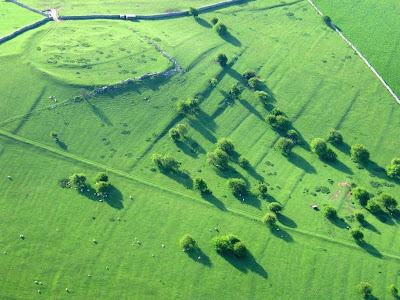 Once there, the remains are fairly obvious, and consist of the earthworks and buried remains of an enclosed Romano-British settlement. The fort is an oval shaped structure, surviving as banks and ditches, as well as the earthwork remains of up to 5 rectangular enclosures within the boundaries of the protective banks and ditches. These probably represent the earth footings of buildings. These remains are situated on the Eastern side of the castle.

An inner stone bank separates these enclosures from the Western side of the castle, running North to South, and probably indicates the boundary of the settlement before a period of enlargement was undertaken.

There are also a pair of dykes that run parallel with each other, probably representing a Northern entrance into the settlement. They run for around 80 metres, and are fairly well defined.

Also running through the castle, is around 65 metres of a medieval dyke, which is represents the Northern end of a 2km, possibly defensive, dyke. The site was excavated in 1974, and it was surmised that the earliest period that the settlement was occupied, would have been around 2AD. During this early period of occupation, the whole site would have been defended with a fence and ditch, and there is evidence that the yards between buildings were cobbled.

Sometime in late 2AD or early 3AD, a new stone perimeter was erected, and it's likely that the original outer ditch was abandoned. An outer rampart replaced the ditch, and can still be seen to some degree.

The castle has been slightly damaged in the past by some ploughing, but more recently by the use of tractors. Indeed there is a well defined pathway right through the middle of the earthworks. This site isn't really accessible, as it's off any public right of way. 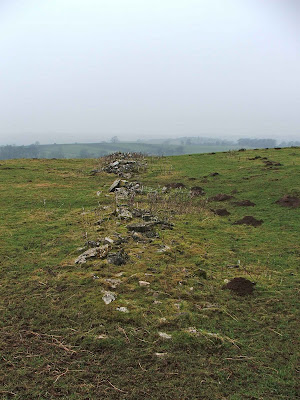 Aerial photo courtesy of Simon Ledingham. This photo really demonstrates the size and scope of this site. Not only does it show the fort itself, it also shows the dykes running through the earthworks, and the strip lynchets on the hill side.
Posted by The Cumbrian Castle listing. at 7:17 pm