Greystoke is about 6 miles North West of Penrith, and about 2 miles North of the A66. There has been a castle here, or at least a fortified dwelling, since 1353. At this date, William, Lord of Greystoke was granted license to crenellate, in a license granted at Westminster on the 5th of October. This fortified tower, lay at the North end of the Greystoke site, and would have measured about 13 feet by 11 feet. Unfortunately for us, it was mostly demolished during alterations that took place in 1789. The castle passed to the Grimthorpe family, and then from around 1506 to 1569, the castle was held by the Dacre family. The Howard family then took ownership from 1595. The castle was captured by Parliamentarian forces in 1648, and was burnt and severely damaged. From this time, it lay in ruins, until some rebuilding was conducted in the 1670’s, by Henry Charles Howard. 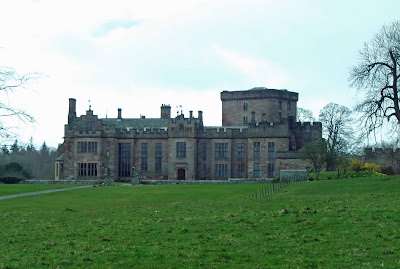 Buildings on the estate were rebuilt further from designs by Anthony Salvin, also famous for work he did on Muncaster Castle and other large country houses in Cumbria. A disastrous fire did much damage in 1868, with repairs conducted by Henry Howard. The grounds around the castle were commandeered by the British Army during WWII and used as a tank driving training range, with the castle and its buildings being used as a prisoner of war camp. During this period, the grounds and the buildings were comprehensively damaged. It took many years for repairs to be made, and the process of bringing the castle to its former glory seems to be ongoing today.

About 200 yards to the North of the castle, the earthwork remains of what has been described as a civil war battery can still be seen. It’s likely that from here, Parliamentarian forces would have fired up on the castle during the brief siege in 1648.

The castle and its grounds are private, and are only accessible by customers of the Corporate Hospitality, outdoor management training facilities and the nearby outdoor activity centre.

Check out Simon Ledingham's aerial photo of the castle.

This is a link to the castle's official web site.

Posted by The Cumbrian Castle listing. at 11:19 pm

Excellent collection of photos here and on other web sites too.

You are a talented photographer

An ex colleague - (in Env Health tho) Kathy x