Dalemain sits at the side of the A592 on the West side of the River Eamont, and about 4 and a half miles South West of Penrith. There is some discrepancy over whether this building contains the remains of any fortification, and such are the extensive rebuilds and renovations that have taken place since the 15th century...it's certainly hard to tell. 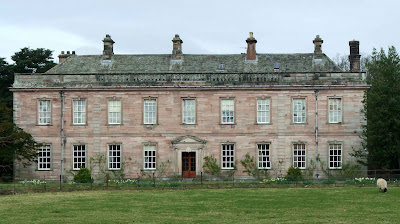 Initially, it's thought that the first building on this site may have been a 12th century tower, but there are certainly no remains of this building. What can be seen today, dates from the 15th, 16th, 17th, 18th and 19th century...with each period of rebuilding and extending adding more character to the house and further masking any original features. The 15th century portion of the house, which can be seen as the central bay of the above photo, could possibly represent part of a pele tower...but could just as easily be the remaining visible parts of the original Tudor country house. Whatever the origin of this site, it's included here for it's regional importance.

According to plans of the building, there are two possible parts of the existing hall that could represent these fortified beginnings. The first is the outermost room, on the right hand side of the photo shown above. This could be a 17th century tower, with the thick walls still remaining along with a newel staircase in one corner. This part of the building has been redressed and incorporated into the later hall so well, that it is now virtually indistinguishable from the newer parts of the building. The second part, is buried deep within the hall, with possibly only one thick wall remaining. These possible tower remnants are undated, and once again, indistinguishable from the later hall.

The house was owned in the 1680's, by Sir Edward Hassell, Lady Anne Clifford's steward. The house has remained in the Hassell family ever since. 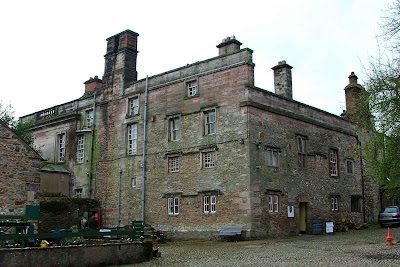 The house is open Sunday to Thursday from March to October, and parking and entry to the gardens is free. Great views can be had from the gardens, and from the grass verges along the A592.

Posted by The Cumbrian Castle listing. at 11:17 pm