Johnby Hall sits about a mile and a half North of Greystoke, and just South of the tiny hamlet of Johnby.
The hall sits on the left hand side of the road as you travel out of Greystoke, high up above the roadside. This is another one of those annoying sites, that is surrounded by high walls, bushes and trees. The view from the roadside is therefore a little limited, and there are only a few tight angles from which the hall can be photographed from. 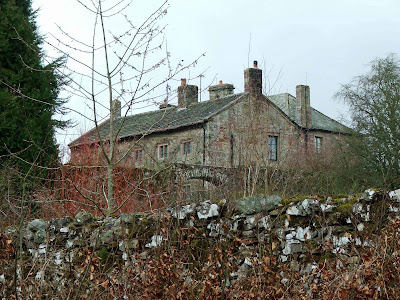 At the very least, Johnby Hall is a fortified house. Built in the late 14th century, with 15th, 16th, 17th, 18th and 19th century alterations and periods of re-building, it’s a formidable building, with a wide range of outbuildings of a similar age.
The hall consists of a 14th century two storey ‘tower’ to which a small 15th century tower has been added….a narrow corridor joining the two buildings. During the 16th century, the two towers were further joined, with the outer walls being refaced. Unfortunately, these two towers are to the front of the property….facing away from the road and totally private. The two views shown here are of the rear of the hall, backing onto the road beneath it. 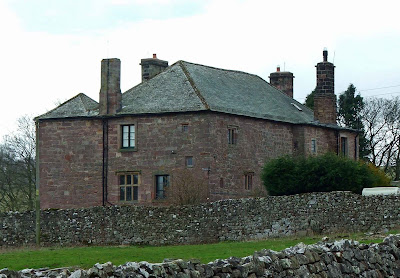 It’s thought that the Johnby family may have built the original tower. The improvements conducted in the 1650’s were undertaken by Sir Edward Musgrave, . The hall was leased to the Williams family. During their tenure, a stable block and a coach house were built. The hall was then leased to the Hasell family in 1696, and then sold to the 10th Duke of Norfolk in 1783.
Check out the Johnby Hall web site.
Posted by The Cumbrian Castle listing. at 11:21 pm