The Red Tower sits on the Eastern extremities of York's defences. It was the last line of defence at the Northern tip of the city's walls as they run along side what is now Foss Islands Road. There were no stone defences between the Red Tower and the Layerthorpe Postern (now gone) which left about a half mile gap in the walls. However....the land here was considered impassable due to the Kings Fishpool. This artificial marshland was created after 1069 when the Normans damned the River Foss where it joined the River Ouse. The result was that the moat around Cliffords Tower and the rest of the castle was filled with water, and the lower lying area upstream also became flooded thus creating the Kings Fishpool. It is estimated that around 100 acres of 'good farmland' was lost to the flooding of this area. At its widest point, this wetland was about a quarter of a mile wide. Above. Looking North up Foss Island Road.
Nearly 600 hundred years later, the Kings Fishpool was still regarded as a significant barrier to anyone wanting to gain entry to the city of York. When the city was besieged by Parliamentarian forces in 1644 plans were drawn up for building a bridge over this area, to gain access to the city and bypass the walls and gates. 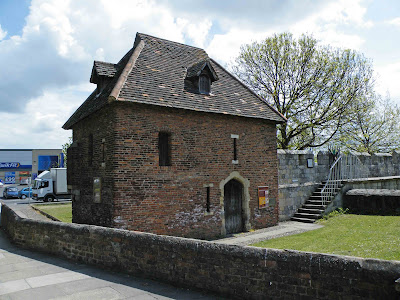 Above. The tower with wall stretching away to the South.
The Red Tower is a very different structure to that shown on sketches dated 1776. In these drawings, it is shown without a roof and the whole of its Western wall collapsed. It first appears in documents as 'The Rede tower in the water of the Foss', sometime around 1511. This document details the supply of artillery to the tower and the nearby walls, and also states that the base of the tower was lapped by the rivers waters. 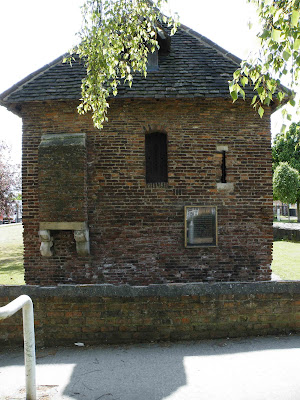 Above. A view of the tower showing the garde-robe on the North wall.
The Red Tower is unusual in York, in that it is constructed of red brick. It is likely that this material was much cheaper than the lighter coloured stone used elsewhere in the city's towers and walls. 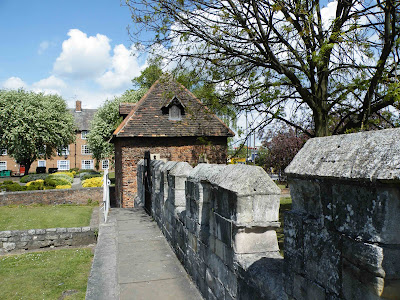 Above. A view of the tower looking North from the walls.
The fact that the tower was supplied with artillery in 1511 possibly indicates that it was already standing at this point in time. It may have been built sometime around 1490....a tower built of brick and by the brick layers instead of the masons is certainly mentioned at this time, causing friction between the two sets of craftsmen. The masons were traditionally employed to build the walls and towers, and were somewhat irked that the more lowly brick layers were favoured for this project. 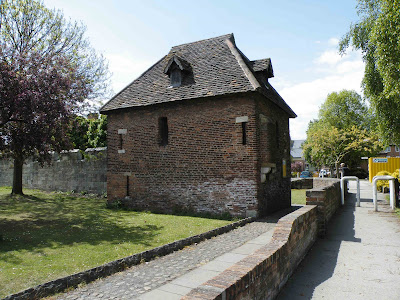 The Red Tower is a small rectangular building, looking more like a small house than a defensive tower. It once stood to around thirty feet, but now stands to around twenty from floor to eves (the pitched roof is not original) The ground level has been raised here, burying about ten feet of wall. The tower was heavily repaired between 1541 and 1545, and plans of the building dated 1616, still show it with a flat roof. 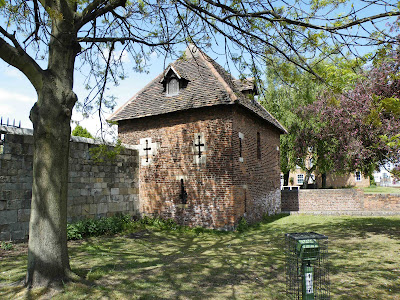 Above. A view of the tower from outside the walls, looking North.
A photograph dated 1853, shows that further repairs had been carried out, with more repairs done in 1857. This final period of repair and rebuilding, essentially left us with the tower we see today. The ditch, dug out in 1645, is no longer visible, having been filled in.
Posted by The Cumbrian Castle listing. at 3:22 pm

Seems like you've had a good holiday in Eboracum/Jorvik! Fascinating remains. I have a passion for survival; thus the west(?) wall at Chester, largely Roman masonry.