This relatively modern gateway bridges Victor Street as the leaves the city on its Southern side. Opened in 1838, it was purely a functional gateway, enabling traffic to exit the city from the Nunnery Lane area. 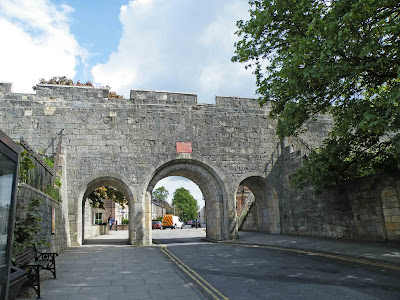 Above. A view of the bar from outside the walls.
The gate consists of a central archway with two flanking pedestrian arches. The two additional arches were created in 1864 and 1867. 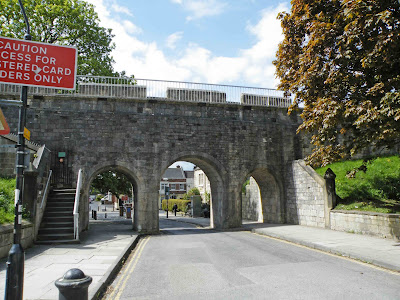 Above. A view of the bar from inside the walls.
As this gate was being built, an earlier but blocked gate was discovered, possibly representing a medieval gateway called Lounelith in historical records dating from the 12th century. This gate had been bricked up with huge stones, wooden piles and mounds of earth. There seems to be no historical information relating as to why this gateway would have been blocked, but one suggestion is that it was closed to secure York's defences in 1569, during the Northern rebellion.
Posted by The Cumbrian Castle listing. at 7:24 pm