This beautiful, almost complete gateway into the city of York, sits at the junction of Lawrence Street and Foss Islands Road. The earliest historical mention of the gateway is from documentation dating from the 12th century, and indeed, the earliest pieces of masonry here at Walmgate, date from the this period too. The Bar as we see it today, dates mostly from the 14th century, with only the inner arch of the main gateway dating from the earlier (12th century) period.

Above. A view of the beautifully restored interior of Walmgate Bar.
The Bar is two storeys tall and has two corbel led bartizans on its external face. It also retains its portcullis and the huge 15th century oak doors. 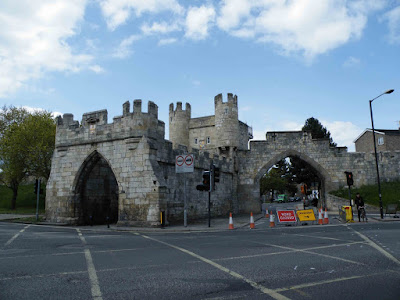 Above. A view of the exterior of the Bar, showing the barbican.
The interior timber extension is supported on two stone columns, and dates from a 1584\86 period of repair. 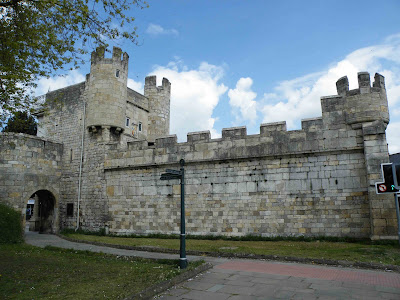 Above. A full length view of the barbican.
Walmgate Bar has suffered much over the years, and has subsequently undergone years of repair and rebuilding. In 1489 the Bar was damaged by fire, as was Fishergate Bar. Walmgate was defensively strengthened in 1511, with the addition of artillery. 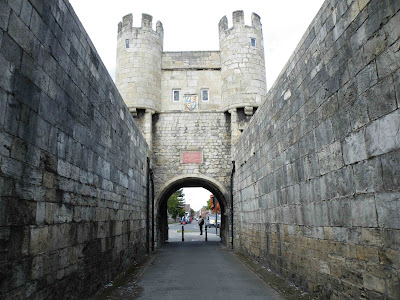 Above. Looking down the barbican into the city.
The Bar was assaulted during the siege of York in 1644, when canon fire was directed on it from Lamel Hill, and from the church yard of St Lawrence. The Bar was also mined at this time, by the attacking Parliamentarian forces. After the siege, Walmgate was temporarily patched up and a huge earthen rampart was thrown up across Walmgate street. Permanent repairs weren’t conducted until 1648. The attempted mine was filled in in 1645, but it apparently left a ‘dip’ in the North wall of the barbican. The City Corporation couldn’t afford the repairs in 1646, but were given a Parliamentarian grant of £5000 to repair it completely. 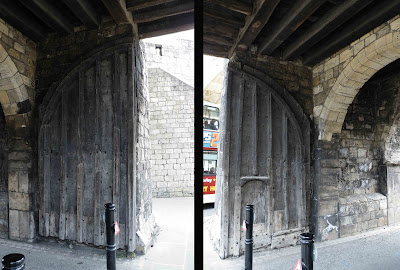 Above. The 15th century oak gates.
In the late 18th century, houses had been built right up to the barbican’s walls, and the battlements and the bartizans and part of the North wall of the barbican were in a poor state of repair. Expense seems to have been a problem again, where repairs were concerned, and it was recommended that the barbican be removed completely (as had happened at the other bars) Luckily for us, the barbican was finally repaired in 1840, with all the housing built up against its walls completely removed.
Walmgate is now the only town gate in the whole of England, that retains its barbican.
Posted by The Cumbrian Castle listing. at 6:44 pm