This tiny stone circle lies about a mile East of Shap (off the A6) along the B road from Shap to Crosby Ravensworth. The circle sits in front of, and to the West of a small scar called Castlehowe Scar, which is now covered with trees.

Above. A close up view of the major stones of the circle.
Although this is, relatively speaking, a tiny circle (it is perhaps only about ten feet across) it is really part of a larger collection of circles and megaliths in this area. Other sites include Kemp Howe to the West and Gamelands to the South, as well as numerous single standing stones and burial mounds. 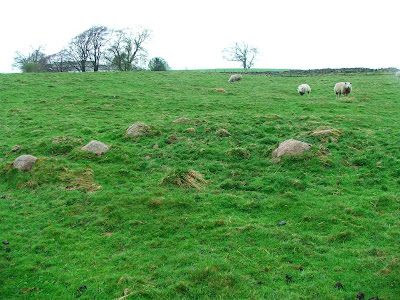 Above. Some of the many 'erratics' scattered throughout the field.
The circle consists of a collection of ten stones, including an 'outlier' to the North East (not shown here) One of the stone still stands to over a metre in height, whilst the rest have fallen. All the stones are of Shap Granite, which seems to be the predominant type of rock in this location. There are plenty of other stones laying on the surface of this field, some arranged tantalisingly in smaller circles. 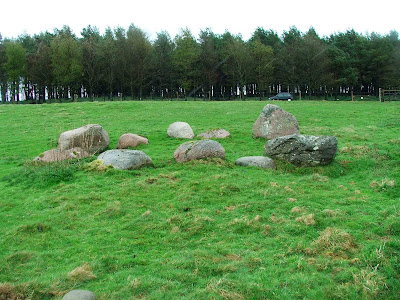 Above. Looking East, over the circle and towards Castlehowe Scar.
This circle is dated by Pastscape, to the Bronze Age. 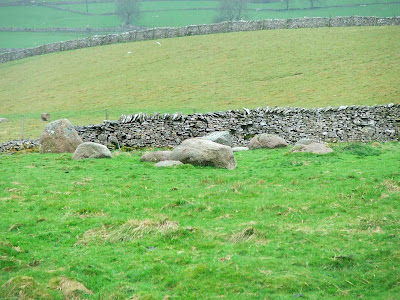 Above. A view of the circle looking South.
Although the circle lies on a private field, it can be viewed from the roads to the North and the East, and from common land which lies to the South....there's also plenty of parking nearby.
Posted by The Cumbrian Castle listing. at 6:45 pm