This small bar lays at the Southern end of the city, about a hundred yards South of the Fishergate Tower and postern. This is a simple gateway, consisting of a wide central arch with two smaller pedestrian arches either side. The central archway still has its portcullis groove. It is mentioned in documents of 1315, as Barram Fishergate, and later, in documents from 1401, rent details are mentioned, indicating that this gate may have had a house built over it.

Above. External view of the gate.
It's obvious that the gateway we see today is not the 14th or 15th century gateway, but a much changed structure, probably dating from 1442,43, when building works were recorded here, as well as the hanging of new wooden gates. A sketch dated 1675, shows the gate with two rectangular towers either side of the central arches. 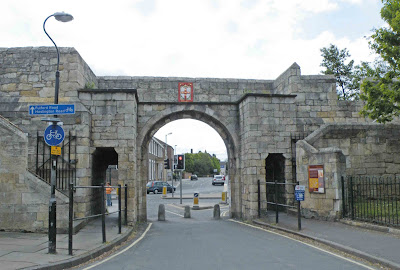 Above. Internal view of the gate.
Fishergate Bar was badly damaged during rioting in 1489....rioting that came about as the result of Henry VII's taxation. It was not repaired, but bricked up instead. There were plans to open the bar and repair it in 1502, but it was not until 1827 that it was finally consolidated and re-opened.
Posted by The Cumbrian Castle listing. at 5:05 pm