Situated at the end of a short 100 metre stretch of wall that would have once connected the Davy Tower to the Castlegate Postern (now gone!) this tower probably doesn't feature on anyone's visit to York these days. 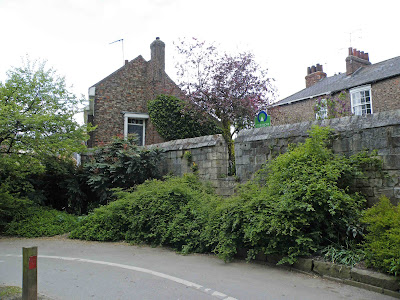 This stretch of wall, judging by some contemporary drawings of this specific area, does not appear to have ever been very substantial....although today it is even lower. This is partly due to the fact that the surrounding ground has been raised for added flood defences. The lower levels of the Davy Tower, and the wall leading off it, are buried beneath the earth for this reason. 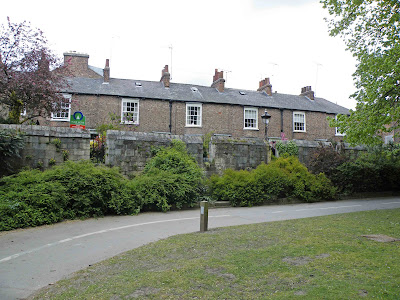 There is a a very narrow wall walk on the inside of the wall, which may have been emboldened with a timber platform. Some of the wall's embrasures have been bricked up and the outer ditch, dug out in 1454, has long since been filled in. 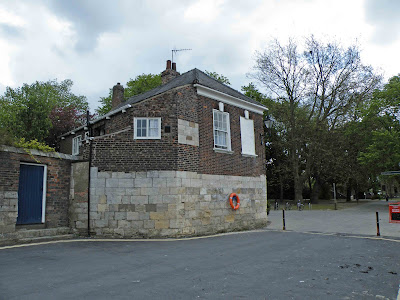 The Davy Tower sits at the South Western end of this short stretch of wall, and probably dates from the early 1300's. It is mentioned in documents dated 1315 and again in 1380, as the Davytoure. It was also historically known as the Tower of the Friars Minor, due to its proximity to the Franciscan Friary. 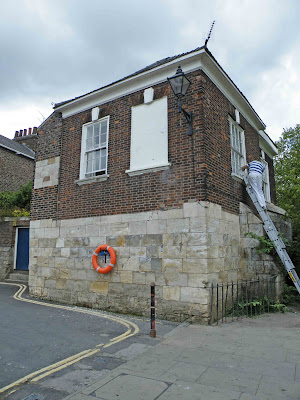 Originally a rectangular building, it appears to have lost its North West angle. Hiding behind some bushes to the side, one of the tower's walls still contains an arrow slit and a small gun loop. 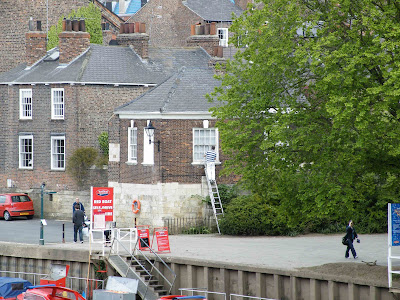 Above. A view of the tower from across the river.
Between 1731 and 1750, a brick summer house was incorporated into the South angle of the tower. The whole structure has now been converted to a house, and only the pale stone work now visible to a height of about ten feet, represents the remains of the medieval stone work.
Like Barker Tower and Lendal Tower, the Davy Tower would have been used to secure a chain across the River Ouse, with the other side of the chain being secured to the now demolished Skeldergate Postern tower.
Posted by The Cumbrian Castle listing. at 7:03 pm


I am grateful to you for flagging up this interesting tower and section of wall. I used to live in York and did not know about it! I visited it today whilst in the city and enjoyed seeing both tower and wall. Thanks to you I also knew to look for the arrow slit and crossbow slit. Impressive medieval survivals!

I own the summer house that sits on top of the Davy Tower (the house where I grew up!) and can confirm that it is part of the old city wall, as is the stretch that goes along the side of Tower Gardens.

I believe the plaque you mention refers to the stretch of wall that goes along the river and was part of the friary. It looks similar to the city wall but was part of a different structure.

So, both are right!

In the early 1970's my tutor lived in the tower. When I visited her I'm sure that there was a pay-box in the basement - perhaps once part of a ferry across the Ouse.

I believe your tutor was my mother - Pippa?