From the summit of Hallin Fell some three and a half miles to the South, Dunmallard Hill can clearly be seen at the Northern tip of Ullswater. This is a spectacular tree covered multivallate hill fort with an enclosure at the very top. This defended enclosure measures around 92 by 39 metres, and is surrounded by a stone faced bank some three metres high and nine metres wide.There is also a ditch, one metre deep and nine metres wide. 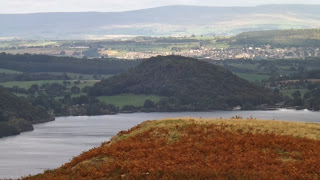 Above. Close up of Dunmallard Hill from Hallin Fell.


There are records regarding a tower somewhere in the vicinity of Dunmallard Hill, but there is no archaeological evidence to suggest that this tower, dated from around 1317, would have been situated at the summit of this hill fort. 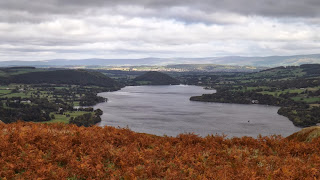 Above. Dunmallard Hill at the Northern tip of Ullswater. 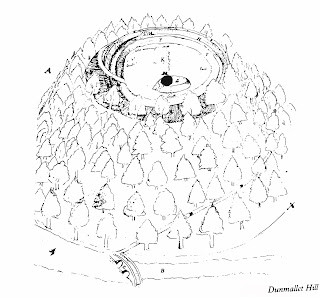 Above. Thomas Machell's sketch of the hill and tower.

J.F. Curwen considered the summit of the mound to be the site of the tower, and gave the licence to crenellate as that granted to William de Dacre in 1307. He also considered that this site was eventually abandoned by the Dacres in favour of the castle at Dacre, a few miles to the North.

The tower is mentioned in the Wardrobe Accounts of Edward II "assigned to the same (William de Dacre) by Antony Persaigne on the King's behalf to guard the peel of Dunmallok with ten men at arms  and ten hobelars and to receive yearly as his fee by that agreement for the custody £160.5s "

Check this link for some photos of the fort and Maiden Castle.

And of course, some information and photos from Julian Copes' The Modern Antiquarian.
Posted by The Cumbrian Castle listing. at 4:24 pm