Seymour Tower is unique on Jersey, as being the only square built tower on an island of round Conway and Martello towers. It was one of General Conway's planned thirty towers. Seymour tower was built in 1782 after the Battle of Jersey, an attack on the British in Jersey by the French, in an attempt to remove the danger the British posed to French and American shipping. Ultimately, the British won this small battle, and as a result, a number of towers, including Seymour Tower, were hurriedly completed to help fend off any further attacks.

The tower is situated off the South East coast of Jersey, about one and a quarter miles off the coast. It is thought that this Conway tower replaced an earlier tower. 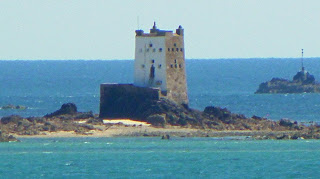 A few miles to the West of Seymour tower, and also built some distance from the coast, is Icho Tower, one of the earliest Martello towers on Jersey.

Photos courtesy of Martin Russell.
Posted by The Cumbrian Castle listing. at 8:19 pm