Fliquet tower is a Conway Tower....a tower built to designs and concepts by General Conway, Governor of Jersey. Conway was responsible for the design and construction of thirty towers around the island, though from the inception of their design in 1778 to Conway's death in 1795, only 22 towers were actually built. What made these towers so radically different from the later Martello towers, was that they were equipped with machicoulis, stone built devices at the roof line of the towers, designed to allow defenders to drop or fire missiles onto the heads of attackers. Fliquet Tower had its machicoulis removed so does not look like many of its surviving contemporaries. 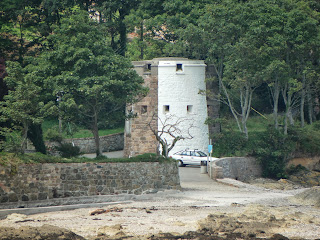 The tower can be found on the North Eastern tip of the island, and, apart from having the top level removed, is in excellent condition. Check this link for an excellent old photo of the tower.

Photo courtesy of Martin Russell.
Posted by The Cumbrian Castle listing. at 8:16 pm