Archirondel Tower was another of General Conway's towers, started in 1793 and finished eighteen months later. It was the twenty second tower to be completed by Conway, and too much longer than his other towers to complete, possibly owing to its location. The tower can be found offshore on a rocky bank in the sea off the East coast of Jersey. 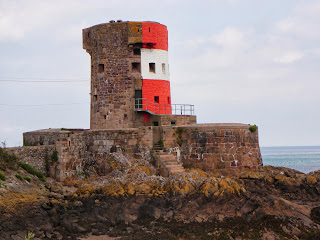 Archirondel Tower was the first tower on Jersey to be built with a gun platform at its base, and can probably be viewed as a prototype for La Rocco Tower off the West coaset. Archirondel Tower has three huge sets of machicoulis at its summit.

Posted by The Cumbrian Castle listing. at 8:14 pm