This is a large well preserved motte very much in the vein of the Motte of Urr. The earthworks lay just to the North of the A755 some three miles West of Kirkcudbright. I wasn't expecting to see such a spectacular earthwork castle to be honest. Even aerial photos don't do this site justice, so when I spied it in a dip in the surrounding fields and hills it was a great find.

This is one of only a handful of Galloway mottes that can be reliably verified by written documents, as belonging to a specific landowner....in this instance Hugh de Moreville. The Moreville family already owned huge tracts of land in Lauderdale and North Ayershire. The Morevilles will most likely have gained this area directly from the Crown or will have taken it from Uchtred who lost the Lordship of Galloway in 1160. Either way, the establishment of such a huge motte would have been a 'hard to ignore' feudilisation of the surrounding area. 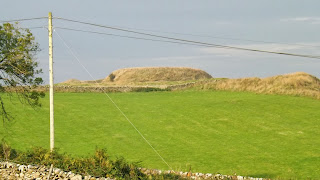 Overall, this site is slightly smaller than the Motte of Urr, but the motte itself is larger, standing to some seven metres above the surrounding fields. The summit measures in the region of 35 by 25 metres, and is built up over a naturally occurring rocky outcrop. 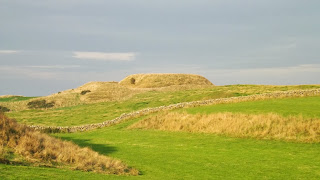 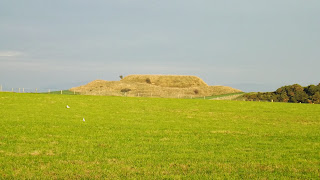 Any former bailey area appears to have long since vanished....perhaps ploughed out. Certainly, from aerial photos, there is no evidence of the remains of any bailey. There is a similarly sized circular area to the South of the motte that may have been the bailey, but it is very faint now. 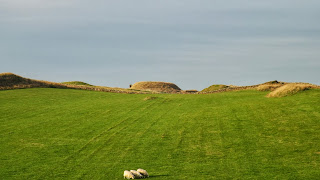 Sometime around 1200, the Lordship of Borgue passed to the de Campania family, which may account for the appearance of smaller mottes at Barmagachan and Roberton, both still visible today.
Posted by The Cumbrian Castle listing. at 5:34 pm