Situated less than a quarter of a mile the East of the tiny village of Borgue, the ruins of this once great house can be viewed easily from the adjacent road, the B727. 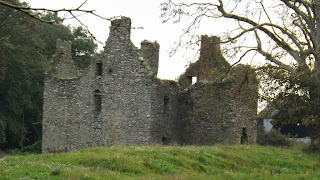 Research on the internet appears to show that the house has been on the Buildings At Risk Register  since about 1992. There seems to have been promises of consolidation work by the owners, but a 2011 inspection of this ruined building, appeared to show that little or nothing had been done to slow down its slow demise or repair any seriously damaged parts of the building. 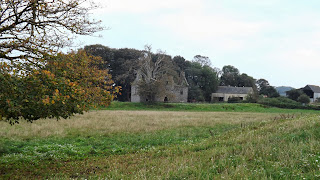 A date stone originally from the house suggests a build date of 1680. It is basically an E shaped structure, with the original hall flanked by two wings at the South East and South West angles. A third wing was added at a later date containing a wooden staircase. Check out this link for some great aerial photos of the site.

More information will be posted here as and when it comes to light.
Posted by The Cumbrian Castle listing. at 5:43 pm

Pretty good post. I just stumbled upon your blog and wanted to say that I have really enjoyed reading your blog posts. Any way I'll be subscribing to your feed and I hope you post again soon. Big thanks for the useful info. sửa nhà giá rẻ