The small Lancashire village of Dolphinholme lays around 2 and a half miles East of Galgate, just off the M6 and junction 33. The motte and bailey castle remains can be found on a high cliff overlooking the River Wyre.

Sadly all that remains today, are a slight earthwork in the garden of the nearby house, measuring some one and a half metres in height, and a huge quarried hole where it’s likely that the bailey once sat. 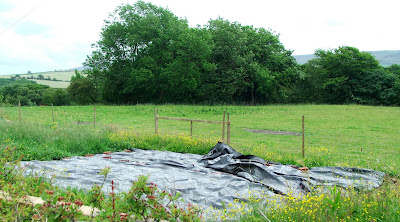 The site is somewhat obscured by both the trees and the house, so the two photos here are indicative of the context in which this site is situated. The trees probably represent the site of the bailey…the motte is hidden behind them.

Although the remains are not easily seen, a foot path runs some way alongside the remains….affording tantalising peeks at the earthworks.

Posted by The Cumbrian Castle listing. at 8:59 pm