The castle lays just off the B6430 South East of Garstang in Lancashire. Although on private property, the castle can be viewed from the footpath that runs along the unclassified road that runs past the remains. There are a couple of gateways that afford good views of the scant remains. Like Kirkoswald in Cumbria, this site consists of a single tower, with some scattered masonry poking through the thick undergrowth. 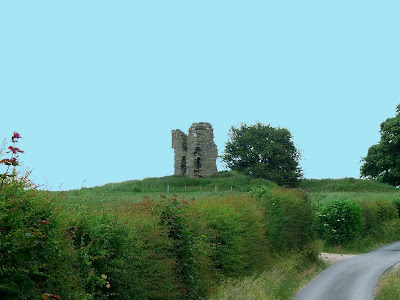 Above. View of the castle looking West.

Primarily, today all that can be seen, is the North West facing wall of a corner tower some seven and a half metres square. It’s likely that this tower was set diagonally to the walls it was attached to…just as at Dacre. Each corner of this tower, and perhaps the others, had small windows set in the angle of the wall, and this seems to have contributed in no small way to the collapse of the towers. The surviving portions stands to a maximum height of around 20 feet with masonry remains scattered all around the base. The castle is said to have had a wet moat, although there doesn’t seem to be any evidence of this feature now. All that can be seen, is the mound upon which the remains now sit. 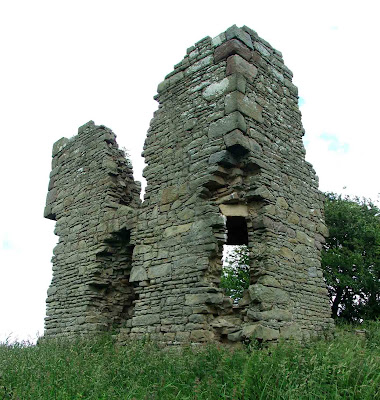 Above. Close up view of the surviving corner tower. 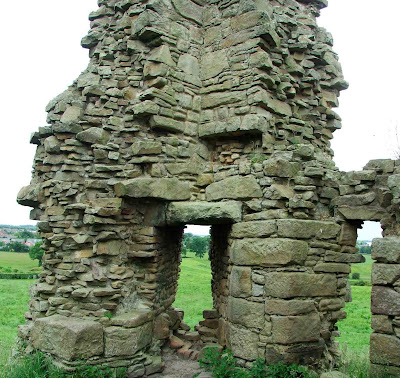 Above. Internal view of the corner tower.

The castle’s owners, the Stanleys, were granted a license to crenellate in 1490, most likely meaning that they were granted permission to rebuild and remodel the manor house that already stood on this site, rather than building a castle from scratch. The castle was demolished in 1645, when Parliamentarian forces finally took it after a long siege. It is said that the siege lasted 2 years, and the castle was only surrendered upon condition that the garrison were given safe conduct to leave for home.

Above. View of the castle looking North West.
The castle continues to deteriorate, and with the combination of burrowing rabbits, the weather and encroaching vegetation, will probably continue to do so for years to come.

Check the Greenhalgh web site out.
Posted by The Cumbrian Castle listing. at 9:01 pm

On July 16th 1945 I was a member of a troup of about 20 Sea Scouts from Allerton, Liverpool which were given permission to camp for 2 weeks in the field next to the castle. My uncle Louis Sheridan was the headmaster of the school from which most of the scouts came from. After a week we were obliged to move from the field because some of us had trespassed into a neighbouring field to collect firewood. We found another site near the centre of Garstang. Heavy rain washed us out of our second site after a few days and we spent the remaining days bedded down in a local school/church hall.