This Scottish tower house can be found on the A75 about 2 miles South of Creetown, and about 3 miles West of Gatehouse of Fleet. The remains are simply stunning, well preserved, and although on private property, are accessible to the public, sitting as they do in the grounds of a small tea room. 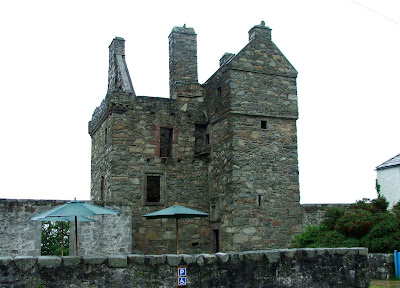 Initially, as you’re speeding past the castle it look complete and possibly inhabited. However, on closer inspection, this initial assumption only pays tribute to the work done to consolidate the remains and present them in their current condition. 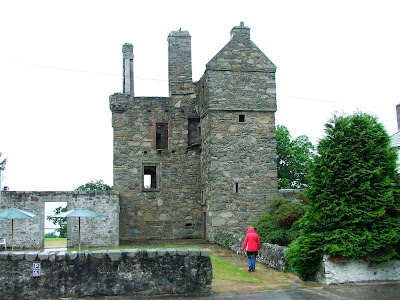 The original portion of this small castle, was probably built in the 1420’s as a simple oblong shaped tower. 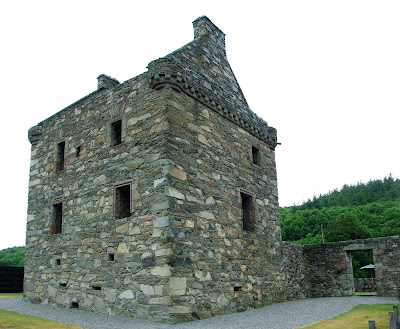 Above. The rear of the tower, with gun loops visible in the lower wall.

Later additions turned it into an L shaped tower house, with light defences, ie; no ground floor windows, a number of small gun ports, walls of 3 or 3 and a half feet thickness and a single doorway. 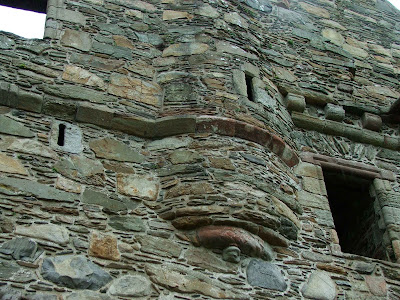 The stair tower, that projects out of the front of the tower, was added in 1568. This date is indicated on a date carved above the doorway, along with the coat of arms of the builders…the Brouns. At the same time that the stair tower was added, battlements were probably removed from the north and south walls, and the addition of a wooden gallery that projected above the front of the tower. 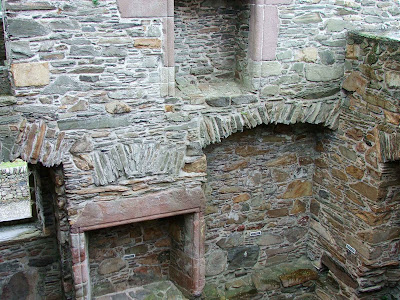 Above. A view from the first floor of the tower.

The stone corbels that would have supported the roof can still be seen, along with the narrow doorway at second floor height that would have provided access to this area. 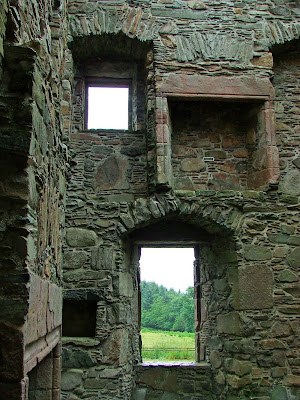 Above. Another view from the first floor looking up at a second floor fire place.

The first floor, second floor and third floor (top floor) would have provided accommodation for both the family and servants and visitors.

Above. A view from the wall walk at the top of the tower.

The ground floor is occupied by storage cellars with vaulted ceilings and a number of gun ports. There are tiny windows above the gun ports…probably added at a later ‘safer’ date to provide additional lighting to these otherwise dark rooms. 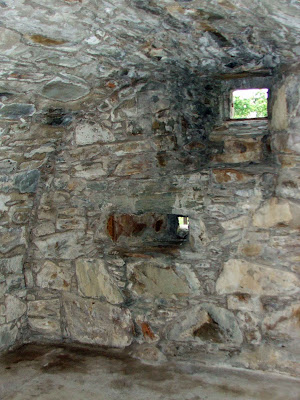 Above. Looking into the vaulted basement with a single gun loop.

The gable walls still stand to their full height, with the chimney stacks complete. The only missing structural item, as with nearly all these tower houses, are the timbers forming both floors and roofs.

Carsluith was built by the Cairns family. The castle and its attendant lands were passed down through the family as follows:

:Alexander de Cairns in 1422, presented the castle to John Cairns his nephew.

:The castle was part of a dowry in 1506, and passed to Elizabeth Lindsay when John married Margaret Cairns.

:The castle passed into the Broun family, when Elizabeth Lindsay married Richard Broun.

:In 1748 the estates, including the castle are sold by James Broun to Alexander Johnston.

:In 1913, the castle finally found itself in state care.

If you decide to visit the castle, you must pay a visit to the Marrbury Smokehouse and cafe. 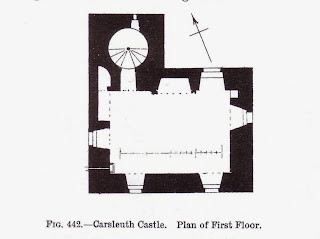 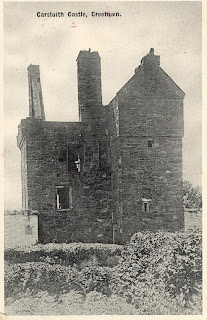 Posted by The Cumbrian Castle listing. at 5:02 pm

What a fabulous page this is. I have been researching my Broun/Brown ancestry for years and when I found that I had Richard Broun of Carlsluith married Elizabeth Lindsay - and that 'Carlsluith' had been sold to Alex Johnstone in 1748 - I think most probably as son-in-law -I googled 'Richard Brown + Carlsluith' and came up with your stunning photographs and directions on how to get to it. I can feel a visit coming on.

Can anyone tell me what roofing material was used on this castle?